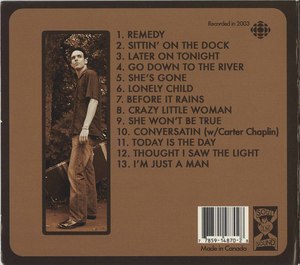 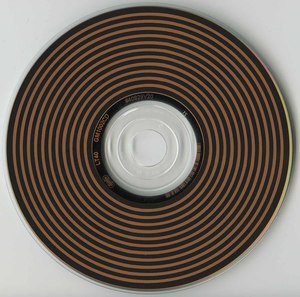 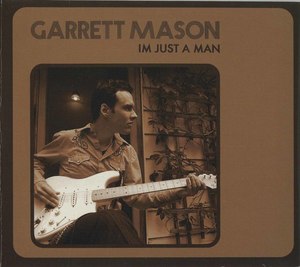 Garrett Mason and his mother, Pam, were at a table “way in back” at the JUNO award ceremony when the announcement was made. Blues album of the year......Garrett Mason’s “I’m Just A Man”. “Mom shrieked,” said Garrett. “And I thought ‘Jesus, it’s a long walk up there.’ ”He ran all the way. At 22 Garrett is certainly one of the youngest Juno blues winners ever. He was competing against Jim Byrnes, The Jimmy Bowskill Band, Rita Chiarelli and Downchild. Garrett has been playing guitar for nine years and singing for just over two years. “ When I first started singing I wanted to sound like Muddy Waters and John Lee Hooker, but you can’t do that when you’re seventeen,” Garrett said with a smile. “My voice was too high.” Garrett’s guitar playing is dazzling—fast and precise, his singing confident and assertive. And he wrote all the songs on “I’m Just a Man.” But he’s not just an exceptionally talented singer/song writer barely into his twenties. There is something else here that is harder to define that makes this album so successful—and a Juno winner. All of Garrett’s songs are based on his own experiences. “I can only write about something I’ve been through, something I’ve felt,” Garrett said. “I have to be true to myself. The music has to mean something to me.” And when he performs the songs of other musicians those songs have to meet the same standard. A few years ago he got talked into playing some pop tunes at a concert in Truro. “I didn’t like the music. I hated myself for weeks after doing that gig,” he said. “I felt like I had sold my soul.” Garrett is assionate about the “truthfulness” of his music. Making money and becoming popular are not his first concerns. Instead, he is driven to express is personal truths, or as he sometimes calls it “soul”, in his music. The emotions Garrett expresses in his music are feelings we all feel at one time or another: the joy of new love, the sadness of lost love, loneliness and depression. A line or two in one of his songs can summon up a whole range of human emotions, make us confront them... and by the end of the song we can put them in perspective and feel, in one word, happier. That’s soul and it’s that personal and truthful aspect of Garrett’s music that makes a lasting connection with his audience.

No one understands that better than Garrett’s Dad. “Garrett is going to go far ‘cause he’s got the right attitude toward music. His music comes from his heart,” Dutch said in an interview the day after the Junos. Dutch was surprised by his son’s win. “Jesus, he phoned me at three in the morning—woke me up—to tell me he won. I kept sayin’ to myself, “This never happens. This never happens.’ I didn’t think he’d do it, y’know, the first time an’ all. Jesus, it took me 40 years to win one and Garrett won it the first time,”Dutch said. “I’m so happy and so proud. He deserved it and he got it.” “I’m Just a Man” is the first album recorded at CBC’s famed Studio H to win a JUNO. “Studio H is a world class facility,” said Karl Falkenham, who produced Garrett Mason’s winning album. “We’ve recorded Natalie MacMaster, Rita MacNeil, Universal Soul, Buck 65, and, of course, Dutch Mason. Until now all the big names that have been through our doors have used the studio as a stepping stone. Garrett went straight to the top.” It was Dutch who introduced Karl to Garrett. “We were recording Dutch’s ‘Half Ain’t Been Told’ and Dutch wanted Garrett to play a part on it. I had plenty of guitar players, but I agreed—sight unseen. I’m glad I did. Garrett added a great deal to that recording,” Karl said, adding that he was impressed by Garrett’s maturity as a “player and a person.” The next time they met was at the annual Harvest Blues Festival in Fredericton. Garrett was playing with Mark Green. “It was kind of bizarre,” Garrett recalls. “It was early in the morning—old women and girls wandering around buying vegetables at this farmer’s market—and we were loud. Karl came up to me during a break and asked me if I had any original tunes and if I might be interested in recording. At first I thought he was bullshitting me.” But Karl called Garrett when they were both back in Halifax. “That meeting in New Brunswick led to two recording sessions for Saturday Night Blues and Atlantic Airwaves,” said Karl. “And what amazing sessions they were!” And those two amazing sessions led to an amazing album...recorded and produced in Halifax at Studio H.
-Peter Barss