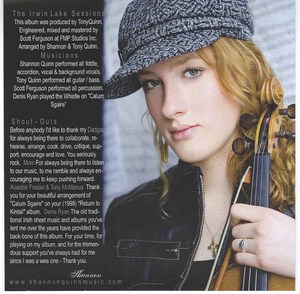 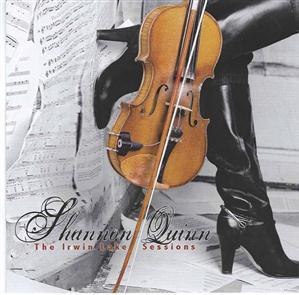 Shannon Quinn is the latest young musician making her mark on Canada through performance. At 20 years of age, Shannon Quinn is a multi-instrumentalist, vocalist, dancer and composer. Having been performing with her father Tony for 12 years, she has been featured among many successful recording artists, and in turn has become one herself. She was born and raised in beautiful Halifax, Nova Scotia, a place full of musical talent.

In Halifax, Shannon performed a live radio program for CBC shows "Canada Live" and "Atlantic Airwaves". As well as performing, she has become very inspired to write music for film, an interest that has sparked within the last few years. She first composed original music for the CBC documentary entitled "Unknown Child" - about a missing boy from the Titanic, and since then her original music has been showcased in films that have been viewed in film festivals from Halifax, to New York. Shannon has had the pleasure of performing with Cirque Du Soleil in Montreal, and the widely acclaimed Irish group The Chieftains in both Halifax, and Charlottetown. She was the youngest ever performer to be accepted into the Charlottetown Festival's Young company, and also the youngest recipient of the Maud Whitmore Scholarship for Vocal studies.

In Toronto, recently she has performed alongside Jazz wizard Chris Potter, and performed with Terence Blanchard this March with the Humber College "A" Band. Her most recent performance was in Nashville, TN for the Music City Roots show at the Loveless Barn, co-headlining with artists such as Alison Brown, and Maura O'connell, and broadcast live on Legendary WSM radio.

Her musical style is highly influenced by that of her ancestors, originating from County Clare, Ireland. Inspired by a wide variety of genres and musicians, Shannon is extremely passionate about creating music, and is currently studying performance, composition and production in Toronto, ON. Her debut album entitled "The Irwin Lake Sessions" was released in March ' 08, as well as the launch of her new music production/publishing company "Cowbell Music".