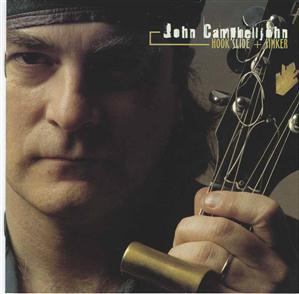 Multiple East Coast Award Winner/Nominee The John Campbelljohn Trio is a hard hitting Atlantic Canadian blues/rock band who's live show has resulted in a steadily increasing fan following. John has been at it for over twenty years, following the tradition of the ones like Duane Allman, Sonny Landreth, George Thorogood, Jeff Healey, and Mick Clarke. He's a seasoned professional who knows what the crowd wants because he's been there a thousand times. Not only German "Rolling Stone" has compared Campbelljohn with Johnny Winter at his best times.

John Campbelljohn was born August 18th, 1955 in Sydney, Cape Breton, Nova Scotia, Canada. He grew up in the midst of the lively, musical culture of kitchen parties and fiddling jamborees that Cape Breton is so famous for. But John went against the locally popular stream of Celtic Music - what inspired him was BB King, Jimi Hendrix, the Rolling Stones and the Blues.

At the age of 14 John got serious about playing guitar, his fathers guitar. Duane Allman playing 'Statesboro Blues' had a most profound effect on John. From that time on, up to the present, John Campbelljohn dedicated himself wholeheartedly to playing slide guitar. He worked hard, and inspired to go back to the source, John studied the music of Mississippi Fred McDowell, Elmore James, Son House, Muddy Waters, Earl Hooker, Robert Johnson and many others. Later he discovered the Sonny Landreth "behind the slide” technique and began to apply it to the blues genre. Growing up in a musical environment, John's talent and devotion to musicianship helped his song-writing and singing skills to develop naturally.

John is particularly proud of his rhythm section. Bassist/singer Bruce Moore & drummer Steve Preeper both from Halifax, share the same depth of experience. The three of them have worked together for many years and are as tight as a Texas twister, tight as a Canadian loony, tight as a bluesman's budget or, as Ronnie Hawkins once said about his band, "...tight as a mosquito's ass stretched across a rain barrel!”