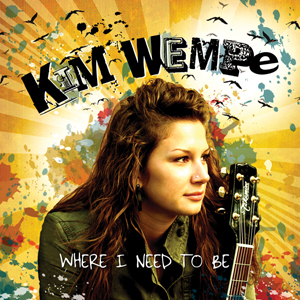 Where I Need to Be (promo)

Kim Wempe's "Where I Need to Be" has set off a storm of excitement that echoes the power of the great Atlantic crashing against the rocks just a Sunday morning walk from the Dartmouth street she now calls home.

He second release, it features two versions of three songs - one take ready for airplay against Taylor Swift on major market country radio, the other a folk based approach reflecting the direction Kim will take with her upcoming full-length release, "Painting With Tides".

The disc includes a bonus live version of the song Warrior recorded at The Matchbox Theatre in Red Deer, AB during Kim's 2009 "Guess Who's Driving Tour" with Cape Breton's Carmel Mikol.

This special edition ECMA package includes the CD, a signed limited run tour poster from ECMA 2010 and an instant digital download of the tracks so you can listen without waiting for the mail.

Thanks to Scott Ferguson, Adam Lomas, my family who are the heart to my soul, Warren Robertson, Carmel Mikol, Krista Keough, Mickey Quase, Music Nova Scotia, John Poirier, all the musicians who played on the album, Kurt Firla, and all of my friends for their unconditional support...thank you from the bottom of my soul.

Produced, mixed and mastered by Scott Ferguson at Ferguson Music Productions.
Executive Producer: Adam Lomas
Art and Design by Kurt Firla
Scott Ferguson - Drums on all radio tracks as well as "Out of My Closet" (Alternate Take)
Donald MacLennan - Violin/Mandolin on all tracks and harmonies on "Where I Need to Be" (Alternate Take).
Greg Hann - Drums on all Alternate Takes
John Chiasson - Bass on all tracks
Bruce Timmins - Guitar on all radio tracks
Carmel Mikol - Harmonies on "Where I Need to Be" (Radio Version).
Special thanks on "Warrior" to Carmel Mikol (harmonica), Steve Ridge, the folks at the Matchbox and everyone who came out to the show.

Kim Wempe acknowledges generous support for this project from the Province of Nova Scotia through the Department of Tourism, Culture and Heritage.

All songs written by Kim Wempe