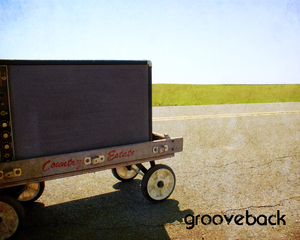 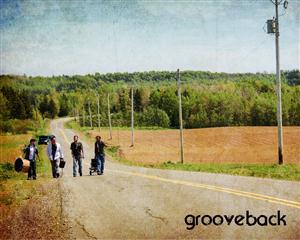 Grooveback is a four piece group consisting of Steven Auld (lead vocals), Mathew Brennan (guitar/backing vocals), Jared Stanley (bass) and Jay Macleod (drums). Their musical sound and style is hard to label under any certain genre, but if need be it can be classed as Funk Rock, or the coined phrase, "Groove Rock". These boys deliver a combination of raw power and rhymthic melodies. They bring a natural vibe to the audience; connecting the people to the music, capturing a sense of freedom which moves from your mind down to your feet, igniting your instinct to dance. A feeling not often exposed.

The vocals from Steven Auld are powerful, filling any room, yet delivering a smooth flow to his compelling lyrics. He may present the audience with a poetic story, or a chorus to pump you up and open your mind. On either occasion he is a force to be reckoned with. Mat's passionate guitar riffs with their melodic comfort give a natural evolution to the compositions, bringing the songs to a higher plateau. But just when you think the music has reached its peak, Mat takes the sound one step further by combining his vocal harmonies in contrast to the lead vocals. Mat's musical style is rare and purposeful, a sought-after sound that is few and far between.

The sound of Jared's bass guitar is that of a bare-knuckle boxer: swift, hard and leaving you dazed. His multi-instrumental talents shine through his bass style, bringing elements of guitar and percussion to his four stringed friend. This empowering sound combined with the drumming style of Jay Macleod gives the explosive nature associated with Grooveback's rhythm section.
The hypnotic beats sung by Jay and his drums instigate an eruption on the dance floor. Tight in sound, yet overflowing with primal rhythm. Jay gives the music a shape and body that floats among the crowd infecting everyone it touches. Combining inspiration from a variety of musical genres and artistic mediums he keeps a common goal in focus: to give the crowd a show that will keep them coming back for more.

This group of longtime close friends, raised in rural mainland Nova Scotia, were brought up on values of family, friends, and a common love for music which is as strong as an Atlantic winter. For many years the boy's weekends consisted of open jams, close friends, and unforgettable times. Once realizing their natural connection and fluent ability to create music, the boys decided to mold their methods and focus on writing material which shares their personal experiences in life and music with the ears and minds of those who listen.