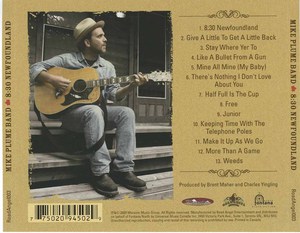 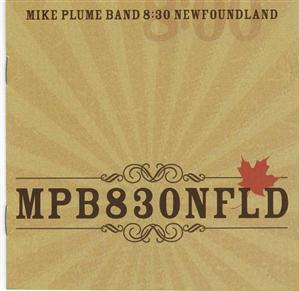 This isn't the Mike Plume's Band first kick at the can, but the record sounds fresh and innovative just the same. Using elements of stompin' country, roots and blues each of the thirteen tracks on the album will make the listener want to get up and dance.

The Mike Plume Band has been a part of the music industry since 1985, and have previously released seven other albums, Table For One, Fools For The Radio, Steel Belted Radio, Song and Dance, Man, Simplify, Jump Back Kerouac and Songs From A Northern Town. Originating in Bonnyville, Alberta the band features some of Plume's closest friends. He has known drummer Anastasios Basiliadis since he was 16 and Basiliadis was 14, and they went to college together. He used to teach lessons to guitarist Derek Masurek when he was 14, and Jackson Langley (guitar) and Ben Wilson (bass) are also old friends of his. It really shows on this latest release that they really enjoy creating music together.

Twenty-four years in the business has served Plume and his band well; their music sounds aged, but only like a fine wine. One of the strengths of the album is that it contains so many different tones. 'Give A Little To Get A Little Back' is exemplary of this as it tries to convince you to just go with the flow of life and to let yourself go once in a while. However, it's not overly sappy or stressed, it's nice and laid back and matter of fact, which drives home the honesty of Plume's sound. 'Like A Bullet From A Gun' runs in a similar tone, taking us on a journey from first job to middle age, showing us that time doesn't stop it's going just for us. 'Stay Where Yer To' balances upbeat music with a lamentable tale of a drunken man drawing us into this sad tale. 'Half Full Is The Cup' is a song that even those 'the cup is half-empty' personalities will have to agree with it's upbeat invitation. 'There's Nothing I Don't Love About You' is a sweet dedication to any lover, but once again Plume leaves the lyrics filled with truth rather than raw, overblown emotion, making the song more believable. 'Keeping Time With The Telephone Poles'" laces comedy with country, and would entice anyone on a road trip to turn up the volume.

There is also the Canadian-themed tracks which follow the title of the CD; it refers to the Newfoundland timezone, which is always 30 minutes ahead of the rest of Eastern Canada. The track of the same name, '8:30 Newfoundland' is a complete survey of Eastern Canada and the Prairies, and speaks to both the positive and negative aspects of Canada; no one knows winter like we know winter. One of my favorites is 'More Than A Game' which would sound perfect overlayed on a NHL highlight package. It's true, hockey is more than a game to Canadians, it's almost a religion as Plume expertly tells it. These two songs don't come across as kitschy, just good old natural fun.

Produced by Brent Maher, a former country star in himself, 8:30 Newfoundland is honest and clean music that everyone can enjoy.