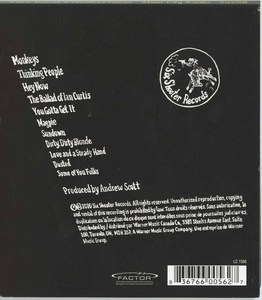 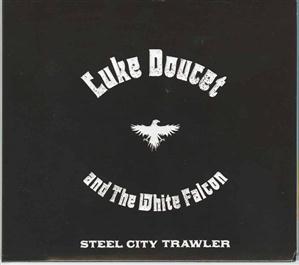 I had to say that because I'm not sure if this is FSR territory really, but heck, it's a great record. This is Luke Doucet's sixth 'solo' album in the last decade but his regular supporting cast get feature billing as The White Falcon in recognition of the co-operative effort that goes into the making of his records. A special mention should really go to Andrew Scott who plays drums, bass and keyboards, produces the whole thing and even gets credited with a few co-writes - Canadian rock's renaissance man, it seems.

On the first couple of listens this album seemed to slot easily into my mental file marked pop-rock. Definitely energetic and quite spiky at times but with a vibe that seemed locked in an immediately post-punk time warp - shades of bands I could barely remember stretching from 1978 through to INXS. Nothing really stood out to begin with until along came a celebratory cover of Gordon Lightfoot's Sundown; it's an irresistible song and I was reminded of a very different version I heard performed by Nels Andrews and Jeffrey Richards in Ullapool - bruised and contemplative, more in tune with the lyric than Luke Doucet's version but hey, Luke's going with the big tune and who can blame him?

There's depth to Luke's own songs, though, and I'm appreciating them more each time I hear them. The "steel city" of the title is Hamilton, an industrial city just west of Toronto where Luke lives with his wife, musician Melissa McClelland. Loosely speaking, the original songs contained here are a series of reflections on the city, on life as a musician and on what it means to have found a soulmate. These are things that could all be written about by a guy in his twenties but there's no doubting that these are mature observations, a looking around and taking stock after that youthful burst of energy has started to fizzle out. Mustn't give the impression he's ready for the cardi and slippers though. Fully half these tracks are furiously energetic rock with some incendiary guitar playing from the man himself. Luke and Andrew show themselves capable of some finely judged homage as well: The Ballad Of Ian Curtis faithfully borrows the drum and bass sound from Joy Division whilst, in a pre-punk moment, Love And A Steady Hand sounds a dead ringer for Baba O'Reilly-vintage Who.

By way of light and shade there's a couple of beautifully gentle songs; Hey Now is almost painfully personal, dealing with the intense need to hide from the world sometimes (and if Neil Young had written it he would have kept it acoustic throughout and not let it morph into power ballad territory - don't let that put you off, it's a lovely song). As for Magpie, Luke goes all Crosby, Stills and Nash, multi-tracking his own vocal in a song of quiet joy that is unlike anything else on the album. Steel City Trawler is altogether rather good - is it too late to give AOR a good name? And finally, I should say it's worth getting the hard copy for the rather lovely book of cartoons by David Collier that illustrate the songs.