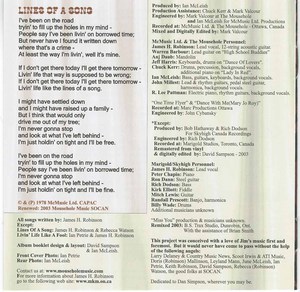 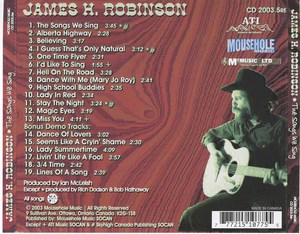 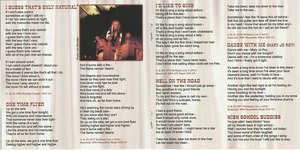 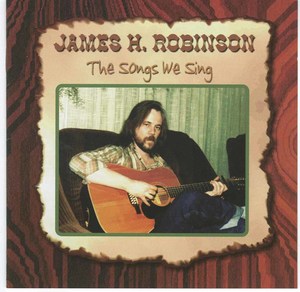 The Songs We Sing

Although Jim passed away before all of his dreams were realized, this native of Sudbury, Ontario who later called Ottawa home, left us with a treasuretrove of terrific folk and country music. Jim' music received a lot of airplay throughout Canada, the USA, Great Britain, Australia & Belgium and he was nominated for Outstanding New Artist at the Big Country Awards in 1987. Although a few of his singles charted on RPM Country Charts in the mid eighties, most of his music remained hidden away until it was uncovered and re-released in 2003 by Ottawa's Ian McLeish of Mousehole Music.

Give this music a listen for James H. Robinson was one of Canada's most talented singer songwriters, a poetic genius. His music is filled with honesty and passion, and like the liner notes say, "many of these songs are so good they should be standards - to be played and recorded over and over, and loved by people all around the world". Fortunately for us, Jim's music lives on with this terrific collection of music; a fitting tribute which features all of James' singles, demos, and a few unreleased and unfinished studio masters spanning all phases of his career.