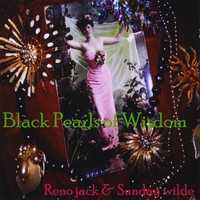 Sunday wilde has been perfoming jazz gospel and blues for the past few years. She’s a songwriter and comes from a musical family of recording artists. She has graced the stage at Magnus Theatre caberets, and is a regular performer around Northern Ontario at various coffee houses.

Reno jack has been in bands such as The Handsome Neds—a legendary country band from Queen Street, in Herald Nix a rockabilly band that had the opportunity to open for the Clash. He was also in a hillbilly jazz band called High Lonesome that won the Busker’s fair in Kingston. . He is an accomplished double bass player, as well as guitar and piano.

Their original songs explore subjects of love, addiction and the torment of social and family dysfunction. Reno and Sunday write from the heart and draw from their personal experiences and observations. Musically they intricately interweave with each other to present an emotionally and dramatically charged perfrmance that will hopefully connect with people from all walks of life.

Reno and Sunday’s influences range from many genre’s and decades of music such as Ruth Brown, Leadbelly, Bessie Smith, Mississippi John Hurt, Big Bill Broonzy, The Killer, and Johnny Cash. But most apparent is their expression exploring themes such as grief, love, ecstasy, addiction, torment and perceptions of the world.

"She performs traditional and original music. I have heard the music and I am impressed. I am a huge supporter of original music.
As we all should be." Molly johnson

"We like to think that some of these songs will help bubble up deep emotions in people, and perhaps provide a cathartic moment enabling people to feel, to move forward, or to alter their lives. If we can reach an audience that is moved by what we are saying, feeling and encouraging, we will have done what writers, poets, and musicians have always tried to do." Sunday wilde

"Black Pearl blues - I caught Sunday Wilde and Reno Jack at the Arts Centre's coffee house a few weeks ago, and their brief show for the Ontario Arts Council luncheon a week earlier, and was just simply blown away.

Jack, a stage veteran (Herald Nix, Cadillac Bill and the Creeping Bent, The Handsome Neds, The Tom Waits Appreciation Congregation, J. P.. Wasson Band, High Lonesome), made his name playing the stand-up bass, but the man certainly knows his way around the guitar, and his growly vocals are perfect for the blues.

Sunday is a newcomer to performance, and is a thrilling singer. She 'sings from her toes', putting it all out there on the line. It's almost a shame to put a microphone in front of her - the raw power of her voice and delivery is best appreciated live, and right in front of you. Her voice is one made for the blues. She brings a dark power reminiscent of Janis Joplin and Billie Holliday, and a flowing, spontaneous musical inventiveness that harkens back to Ella Fitzgerald. Together these two have something special going on: vocally, they complement one another perfectly, and the interplay of their voices gives all the old standards a whole new feel."
Mike McKinnon, Editor, Atikokan Progress