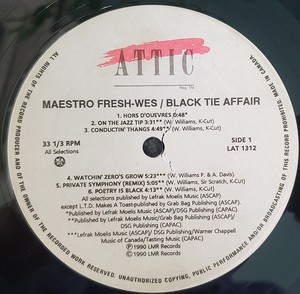 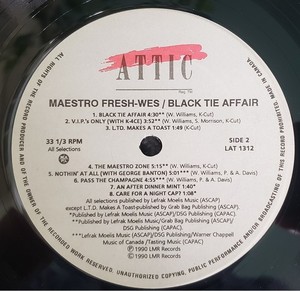 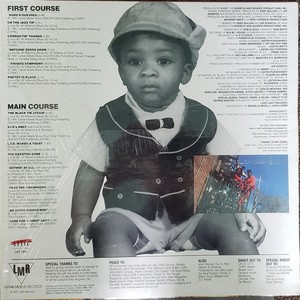 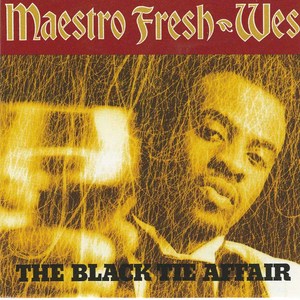 The Black Tie Affair is the second studio album by the "Godfather of Canadian Hip Hop" Maestro Fresh-Wes. Originally released in 1991 on Attic/LMR Records the singles from the album include "Nothin' At All" and "Conductin' Thangs", which was nominated for Rap Recording of the Year at the 1992 Juno Awards. Most of the production was handled by Main Source's DJ K-Cut.

In Canada, the album was certified gold with over 50,000 copies sold. RapReviews.com gave it an 8/10 rating, calling Maestro "conscious in the very sense of the word," also stating "the result is an album that reflects both the era's climate and the rapper's personal situation." The song "Nothin' at All" was praised for being "both accusatory and motivational." In 1989 he became the first Canadian rapper to have a Top 40 hit, "Let Your Backbone Slide." As of early 2008, "Let Your Backbone Slide" remained the best-selling Canadian Hip Hop single of all time, and the only certified gold single in Canadian Hip Hop history. Eighteen years after its release, Maestro's debut album, Symphony in Effect (1989), remains the top selling Canadian Hip Hop album of all time; at 190,000 units sold, it is 10,000 shy of double platinum.

On the aftermentioned song "Nothin' at All", Wes acknowledges this feat, rapping: "My first album, Symphony In Effect went platinum / in Canada that made me the first Black one / to achieve that goal, I even got offered a movie role / Hunh, I turned it down, I didn't wanna be no star / portrayin' a nigga that dwelled behind bars..." Out of print for years, The Black Tie Affair currently goes for hefty sums online. Now is the time to finally own a classic album in the Hip Hop genre whether from the great white north or not.