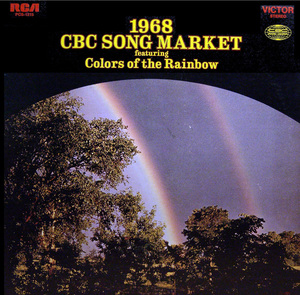 In today's music world where happenings are common place, this album has a special place. It's the first time in the history of Canadian recordings that a single long play album has been devoted exclusively to previously unpublished songs.

The 12 tunes recorded here were chosen from more than 5000 entries submitted to CBC SONG MARKET - Canada's first national popular songwriting competition, organized and produced by CBC Radio. It was intended to promote both professional and amateur songwriters. 32 songs were selected for broadcast.

The contest judges were JULIETTE (a television icon in this Country and possibly one of the first to become a major singing star), RAY BERTHIAUME (Montreal Singer and Musician), RCA Record Producer WILK GILLMEISTER and from the U.S.A., one of the great Broadway legends, ARTHUR SCHWARTZ.

It was originally intended that only the winning song would be recorded, but as the songs became "better and better" the producers felt that an album of songs was the only solution.

The arrangements are by JOHNNY DOBSON, EDDIE GRAF and RICKY HYSLOP, the latter also conducting. The singers are mostly among the best and most popular of the 1960's in Canada: TOMMY AMBROSE, VANDA KING, BILLY VAN, NORMA LOCKE, RHONDA SILVER, JIM PIRIE, CLEONE DUNCAN, EVE SMITH, KEN STEELE and THE LAURIE BOWER SINGERS.