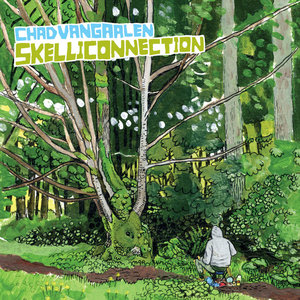 Chad VanGaalen is very prolific. Skelliconnection was culled from hundreds of songs Chad has recorded over the last year or so, while holed up in his bare bones basement home studio. Using handmade instruments alongside those available to mere mortals, he’s created an even more diverse assemblage of music than for his last album and debut, Infiniheart. Chad resides in Calgary, Alberta, which is in Canada. He’s an amazingly talented illustrator and animator. There’s a chance you might have seen the videos he made for his own “Clinically Dead” and Love as Laughter’s “Dirty Lives.” They were featured on MTV2’s Subterranean video show, which Chad also hosted. He’s played with Built to Spill, Wolf Parade, The Pixies, and Stars, to name a few. Mostly, Chad likes to stay home and make songs and drawings. Chad’s new record, on the other hand, resides somewhere a little more difficult to pin down. It’s a restless, living thing, roaming between simple yet beautiful ballads, aggressively dissonant post-punk, and jazz-inflected synth-pop explorations, at times whimsical, and at others heartrending.

Skelliconnection features videos for Flower Gardens and Red Hot Drops, and is packaged in a sideways Digipak. I can't explain it any better - you'll understand when you see it.

For many people their choice in the morning might be which over-crowded route to take to work. The choice for Chad VanGaalen every day is: make art or make music? For as long as he can remember, his everyday life has been devoted to drawing, painting, and recording songs, rarely leaving his colourfully painted house in Calgary, Alberta.

A talented illustrator and animator, Chad’s work has shown across Canada. His drawings have graced album covers for Shout Out Out Out and label-mates The Cape May, and he has created fantastic animated videos for Impossible Shapes and Love as Laughter. Chad's new album Skelliconnection also features hand-made instruments, and has taken him on tour across the US and Canada He is currently drawing and working on new songs.

Legend has it that Chad VanGaalen has written literally hundreds of songs over several years of home-recording and busking on the streets of his native Calgary. But he'd still be a songwriter of note even if his output was limited to just "Clinically Dead", the track that welcomed us into his private world on 2004's Infiniheart (given wide release by Sub Pop last summer). It's his entire oeuvre distilled into two perfect minutes: fragile/fearful vocals, cerebral sci-fi imagery, threadbare guitar and glockenspiel arrangements, and inventive instrumental economy; when its snare and fuzz-pedal usher in the panic-stricken chorus, the effect is seismic. The song should've become an indie anthem on par with the Shins' "New Slang", but Infiniheart's 19-track sprawl-- marked by slumberous drum-machine rhythms and tinker-toy sampling experiments-- made it clear this guy wasn't trying to endear himself to any teen-soap music supervisors.

The word "insular" gets thrown around a lot when describing VanGaalen, but his work-- both his music and his visual art-- doesn't convey a fear of the outside world so much as a fantastical, sometimes horrifying re-imagining of it. Like his Robert Crumb-style drawings, VanGaalen's songs transmogrify their childish appearances into disarmingly perverse shapes. But if we were to judge VanGaalen by Skelliconnection's opening track alone, we'd draw a very different conclusion about him: This dude must love Queens of the Stone Age. Following 20 seconds of circus-organ noodling, "Flower Gardens" explodes into a two-minute rampage that, if nothing else, should at least have his Sub Pop bosses thinking twice about putting him on tour with James Mercer. Of course, Infiniheart fans can rest assured it's a total lark: The rest of Skelliconnection finds Chad VanGaalen being very much himself, albeit with less "Infini" and more "heart."

Although VanGaalen sounds like he could hum Neil Young's After the Goldrush in his sleep, his lullabies are in no way bound to classic-rock tradition: The spirited "Burn 2 Ash" cruises on a fidgety snare rhythm and a one-finger organ squelch before dissolving into a denouement of psych-folk acoustic plucks, mellotron swells, and violin slashes. "Wind Driving Dogs" accelerates its cowpoke lope into an elated double-time gospel chorus. And even if "Rolling Thunder" references Dylan's famous revue, its medieval ambience and ghostly harmonies define it as folk music of a decidedly more sinister nature.

The modest amount of touring VanGaalen did for his first album has made him a more confident singer, and perhaps the interaction with appreciative audiences has inspired him to open up the more accessible side of his songbook and limit his electronic doodles to brief bursts. Like Infiniheart, Skelliconnection is undermined by seemingly random sequencing, still feeling more like a hodgepodge compilation than an album with a purposeful arc; that VanGaalen subverts the poignancy of penultimate acoustic ballad "Sing Me 2 Sleep" with a closing burst of synth/drum spasms ("Systemic Heart") suggests a lingering discomfort with the ideas of canonization and grandeur. But Skelliconnection still stands as an impressive document of VanGaalen's intuitive and inventive songwriting, and its best songs lay bare VanGaalen's gift for turning the simple into the spectacular.
-Stuart Berman, pitchfork, Aug 24, 2006