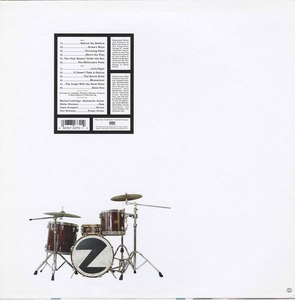 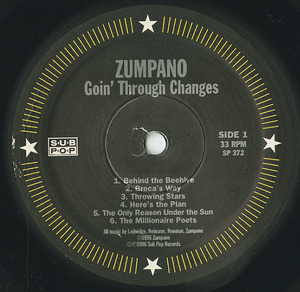 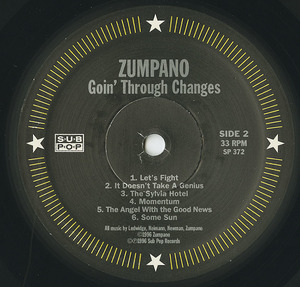 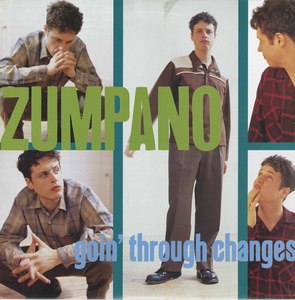 Vancouver-based quartet Zumpano had hinted at their soft pop roots on their 1995 debut, Look What the Rookie Did, covering Jimmy Webb’s “Rosecrans Boulevard” and investing originals like “Oh That Atkinson Girl” with a definite Brian Wilson influence, but the overall sound of the disc was crunchy pop along the lines of late-period Redd Kross. The follow-up, Goin’ Through Changes, largely dispenses with the power chords in favor of a sweet-natured, flowery strain of sunny pop tunes that un-self-consciously betray a deep fascination with the more ornate side of ’60s songsmithery without sounding the least bit retro. Singer and primary songwriter Carl Newman is clearly a fan not only of Wilson and Webb, but Randy Newman, Harry Nilsson, and Todd Rundgren, but unlike many of their contemporaries, Zumpano maintains a freshness and enthusiasm that keeps even the more tributary tracks (like “Broca’s Way,” which sounds like it could have come off of Love‘s Forever Changes) from sounding like stiff, careful homages to past idols. Other tunes, like “Let’s Fight” and the spirited opener “Behind the Beehive,” recall the lighter side of Sloan, or even (dare one say it) the better moments of ’70s bubble-rockers like the Sweet or the Bay City Rollers. Goin’ Through Changes is a terrific album, which makes Zumpano‘s extended layoff following it that much more frustrating.
-Stewart Mason, AMG

Perhaps I am a simple man, but I miss Zumpano. Goin' Through Changes is definitely a favorite of mine, a low tech keyboard driven homage to bands like the Zombies, dBs and the Beach Boys (and lounge pop in the vein of Burt Bacharach) released on the esteemed SubPop label in 1996. Carl has moved on to fame and probably more fortune with Canadian pop collective The New Pornographers but frankly I find this Changes album at least as appealing as his current group. These days A.C. seems less pleased with his Zumpano days, but believe me, if you like the New Pornographers, Zumpano's two albums are essential listening.

Of course, this band is more than Newman--the fact that the songs are credited to all four band members attests to as much. Of course the bands namesake, drummer Jason Zumpano must be credited. Michael Ledwidge's excellent keyboard work is also an equally huge component to the extraordinary pop music here. Rounding out the quartet is Stefan Niemann on Bass.

Judging from the album artwork, you might assume the band is Jason Zumpano and the others. His image dominates the album. They even have his drum kit on the back of the Cd!

In reality (sorry drummers), A.C. Newman's vocals are front and center focus of attention in Zumpano. I think the Zumpano concept may have been a spoof in the vein of Frampton Comes Alive!! However I would be remiss not to mention that there are absolutely stunning harmonies throughout this album, possibly the work of Jason Z. And it is true that he has put out music post-Zumpano, under the moniker Sparrow.

One of my favorites on this album is Broca's Way, with its Good Vibrationy Theremin imitation organ riff, and the powerful Wilsonesque chorus, which dynamically contrasts with the subdued tone of the verses. "True Love looked good at a distance" Newman compellingly sings in the stellar Only Reason Under The Sun, but "doesn't look that way now". Great soaring harmonies again, on the chorus. Of note is dBish piano and harmonica Momentum, one of the most upbeat tunes on the album.

Probably my favorite moment on the album is The Sylvia Hotel with a cello intro leading into perfect beatific pop. Of course I may just be saying this because I am listening to the song at this very moment. Other standout moments include the mellow Bacharach sounding Millionaire Poets, with electric piano verse leading again into a big fat chorus, and the Pet Sounds vibe of the opening tune Behind The Beehive.

The last tune on the album Some Sun is also one of the strongest songs on the album. Nice heartbeat bass by Stefan Niemann, and an overall a masterful use of dynamics and space throughout the song. "Bored myself counting up all the days that I was wasted there", A.C. sings. Credit him for some subtly incendiary guitar work here also. Some Sun is definitely a song I would be proud to have written.

So another great album from Vancouver. But I wonder what happened to Michael Ledwidge? He really was a not so secret foil to Carl Newman on this album and a truly talented keyboardist. I hope that he is still making use of his gift. Goin' Through Changes certainly would not be such an excellent album without his efforts.

I hope that people do check Zumpano out. Anybody who loves excellent pop songs should enjoy this. A lot. While their indebtedness to bands of the past in not very well hidden, that is merely a starting point for this band, as they do put their own unique twist on this genre. And this album, along with groups like the Pernice Brothers was an attempt by Subpop to get away from being stereotyped as the "Seattle Grunge record label". Which they actually were in their early years. But that aside, I still wish Zumpano had put out more material. But who knows? Since every band seemingly reunites, perhaps we will see a Zumpano reunion in the near future. For now we can only pray to the muses of pop-rock for such a happy outcome. It would be muy Zumpatico!
-FJ Kulu

Hailing from Vancouver via Sub Pop’s cute annexe, where the similarly ungrungey Velocity Girl also hung out, Zumpano overcame the encumbrance of being named after a bandleading drummer to be better than the Aynsley Dunbar Retaliation and Ginger Baker’s Airforce combined. Flighty, tactile, light of touch, with an interest in pianos, The Zombies and Burt Bacharach and boasting a hail-fellow-well-met sort of singer in Carl Newman, Goin’ Through Changes improved on their Look What The Rookie Did debut (best thing: a Jim Webb cover) to dally with peak-period Todd Rundgren harmony (witness The Only Reason Under The Sun) and weave a seriously delightful record. Their tragedy? Ben Folds Five had already annexed the sunny geek-pop Sudetenland and set up camp. Still, as with Jellyfish before them, the Zumpano diaspora disseminated the spores of sophisticated pop, as Newman proved his worth in New Pornographers and AC Newman guises and Zumpano branched out with the typically winsome and earnest Sparrow. Now he “fronts” a band called Attics & Cellars – a spicily imaginative line-up of two violins, cello and Jason’s piano. But you only have to take one look at Goin’ Through Changes’ inner sleeve shot (Zumpano ravished, fists lifted to the sky) to recognise a fellow soul, solid-sent by the ecstasies of pop.
-Danny Eccleston, Mojo