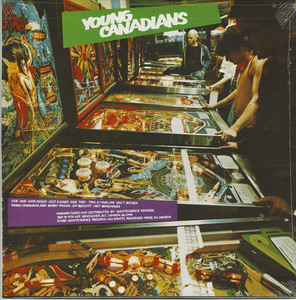 Young Canadians-This Is Your Life BACK 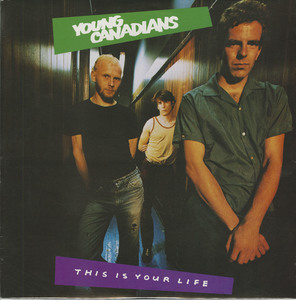 This is Your Life (EP)

A pioneer of Vancouver's punk scene, songwriter/guitarist Bergmann has always walked on the edge and a volatile personality and drug addiction has kept him from reaping the benefits of his on-again off-again solo career.

Growing up in Surrey, Bergmann, son of Mennenite parents, would sing along to Beatles songs with a broomstick for a guitar. He joined his first band, The Schmorgs, in 1977 and with a crudely made debut LP Bergmann and others led the Vancouver punk scene into a revolution that Bergmann would soon sign-post with a number of other legendary acts.

In 1978 he joined the K-Tels who would release two EPs - 'Hawaii' (1979) and 'This Is Your Life' (1980) before a well known record label threatened copyright infringement action against them and so they became the X-Tels and finally The Young Canadians.

In 1981 he joined Los Popularos where a drug addict with some extra cash invested $10,000 in the band's recording efforts in an attempt to launder the money. When the band wasn't able to repay the man immediately he grew impatient and threatened the members with a gun. The situation rectified itself when the investor went to jail for first degree murder. However, the record was finished - a four song EP called 'Born Free'.

In 1984 came Poisoned, whose material was produced by future stars Paul Hyde & Bob Rock, and the resulting two demo tapes and a full 6 song EP 'Poisoned' brought the band to the attention of Canada. But with the rising popularity of LA hairband Poison, they dropped the name and put Bergmann in the spotlight as frontman.

The re-formatted band worked with Vancouver producer Bob Rock (Payolas, Metallica, Aerosmith) on a collection of songs. They went to Toronto on tour to work the new material. At the very moment that Duke Street's Adrian Heaps was holding a pen and record contract, the band was getting ejected from Toronto's Rivoli club for being drunk and disorderly.

The Rock album was scrapped and all the songs would be re-record with a name producer. Velvet Underground co-founder John Cale, who had produced both Patti Smith's and the Stooges' debuts was brought in to smooth out Bergmann's sound sans backing band. Bergmann hated the new version of the 'Crawl With Me' album.

Still 'Crawl With Me' would go gold (50,000) without advantage of much radio airplay.

In 1990, he made a small appearance in director Bruce McDonald's 'Highway 61'.

Despite critical acclaim and significant airplay of the single "Faithlessly Yours"., 'Art Bergmann' (produced by Chris Wardman) only managed to sell 7,500 albums and Bergmann was ditched by his label Polygram in May 1992. At issue was lack of funding to launch a national tour which Bergmann ended up not being able to do because the label offered him half of an estimated tour budget. Many trial shows cost Bergmann money out of pocket, but nevertheless, he was out pounding away, sans band, on the Lollapahoser Tour with the likes of Bootsauce, Pure and Sons Of Freedom.

In 1993 he decided to finally kick his heroin addiction and that experience translated into his 1995 album 'What Fresh Hell Is This?'. He has since maintained a live presence with a newer backing band featuring members of Stigmata and Dead Surf Kiss.

He moved to Toronto and did a series of stand-up comedy/solo performance nights at The Generator before recording an 'unplugged' best-of called 'Design Flaw' with Chris Spedding before stepping out of music for nearly two years.

With the help of Chris Houston (Forgotten Rebels) and his production company, AudioMonster.com, dusted off his first solo demos recorded between February and April of 1984 and released the ten songs as digital downloads with the title 'Vultura Freeway' in 2000.
-Joel Anderson, Gabe Sawhney and Bill Reynolds

Produced by Bob Rock, Edward Thomas and Young Canadians
Recorded in January 1980 and mixed in May 1980 at Little Mountain Studios, Vancouver, British Columbia
Mastered at The Lacquer Channel Limited