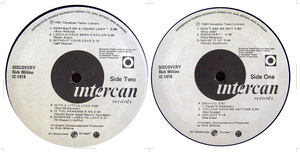 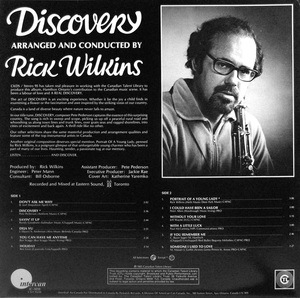 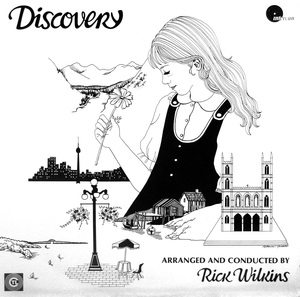 Wilkins, Rick (Herbert Richard). Arranger, composer, conductor, tenor saxophonist, b Hamilton, Ont, 1 Feb 1937. After early experience as a saxophonist and/or arranger with the dance bands of Jack Ryan (El Morocco, Hamilton) and Gav Morton (Brant Inn, Burlington), he moved in 1957 to Toronto. There he played in the dance bands of Benny Louis and others, and in 1960 began arranging music for the CBC orchestra of Jack Kane.

Wilkins studied arranging briefly with Phil Nimmons at the Advanced School of Contemporary Music in Toronto and thereafter made his living primarily in that field. He has prepared and often conducted music for CBC and CTV pop-music and variety series and specials, with Julie Amato, Tommy Ambrose, Guido Basso, Canadian Brass, Burton Cummings, Anne Murray, Wayne and Shuster, and others. For CBS TV, Los Angeles, he was music director 1976-7 for a series and several specials starring the US singing group the Jackson Five. He scored Oscar Peterson's Canadiana Suite for a CBC TV presentation in 1979, and later arranged and conducted Peterson's compositions on record (The Personal Touch, Royal Wedding Suite) and in concert (eg, for Bach 300 in Toronto in 1985 and the Winter Olympics in Calgary in 1988).

Wilkins also has written arrangements for recordings by Peter Appleyard (including Swing Fever), Salome Bey, Ed Bickert, Maureen Forrester, Vic Franklyn, Hagood Hardy, Maxwell King, Moe Koffman, Gene Lees, Anne Murray (including 'Snowbird' and several LPs), Ginette Reno, and Arlene Smith. His own LPs include Christmas with Rick Wilkins and the Mutual Understanding (1970, CBC LM-80), My Heart Belongs to Me (1977, CTL CTLS-5210/New Ventures NV-5003), For the Sake of Music (1978, CTL CTLS-5219; issued commercially as Quiessence, Pickwick PC-66001), and Discovery (1981, CTL CTLS-5238/Intercan IC-1018). Wilkins arrangements also have been recorded by the (US) Louis Bellson and the Capp-Pierce Juggernaut big bands. His compositions include scores for CBC TV dramas (eg, 'The Dumbells,' 1976) and documentaries, music for the opening ceremonies of the Calgary Winter Olympics, and jazz themes recorded by Koffman, (Saturn), the Boss Brass (Greenhouse, Who Asked?), Rob McConnell (Greenhouse, Countless Blues), and the (US) Frank Wess Orchestra (Rink Rat, Pit Pat Blues). His symphonic-jazz composition T.O. 150 was commissioned in 1984 for the Boss Brass and the CJRT (Toronto Philharmonic) Orchestra.

Wilkins has played in Toronto studio orchestras and has been a member of the Boss Brass, Nimmons 'N' Nine Plus Six, and other jazz bands. He has led or (with Bickert) co-led bands on occasion in Toronto clubs and appears as a soloist on albums by Appleyard, Bickert, the Boss Brass, McConnell, Nimmons, and an all-star (and otherwise US) septet recorded at the Concord Jazz Festival in California (Live at the 1990 Concord Jazz Festival - Second Set, Concord Jazz CJ-4452). Wilkins' standing as one of Canada's foremost arrangers has left his jazz work, in an effortless mainstream style, undeservedly overshadowed.
-thecanadianencyclopedia.com