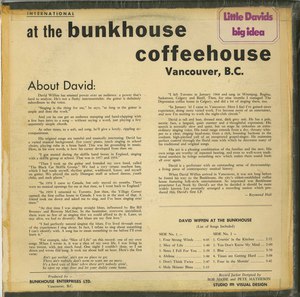 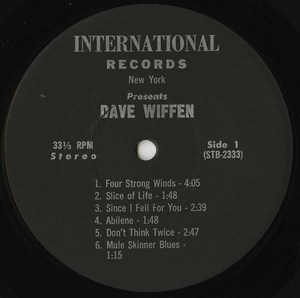 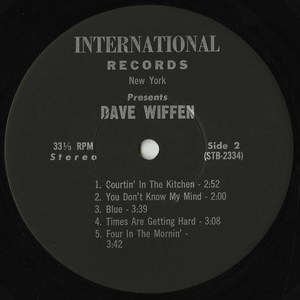 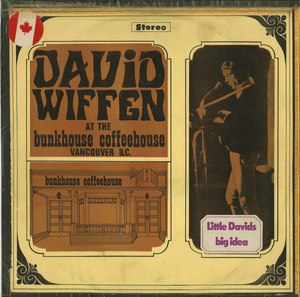 Live at the Bunkhouse

David Wiffen's first album, released in 1965 in a limited pressing of 100 copies, has become Canada's most valuable folk recording and is the Canadian Holy Grail of Folk Recordings. The album features Bob Masse cover artwork and suitably has recently sold for $2,600.00. David Wiffen would become one of Canada's greatest songwriters. However, if you can find a near mint copy (if one exists), expect to pay $3,500.00.

Born in England, Wiffen moved to Canada at the age of 16. He started his music career with appearances at the Village Corner club in Toronto. After that he hitch-hiked across Canada where he ended up working at a Calgary coffeehouse.

In 1965 he was invited to perform at Vancouver's Bunkhouse with an ensemble of other musicians for a live album and when none of the other acts showed up the recording was continued. The result was Wiffen's first solo album 'David Wiffen Live At The Bunkhouse'.

He then joined The Pacers who were soon offered a recording contract in Montréal. Wiffen joined the group as they headed to Québec but when the deal fell apart, Wiffen moved onto Ottawa where he joined the folk act The Children.

The act featured several of Canada's most prominent future artists such as Bruce Cockburn, Sneezy Waters (aka Peter Hodgkinson), and Richard Patterson (The Esquires) among others.

In 1966 another Vancouver folk trio, Three's A Crowd, played the Le Hibou Coffee House in Ottawa where Wiffen met them and was subsequently asked to join the band along with Children drummer Richard Patterson and bassist Comerie Smith from Toronto. Wiffen had also been spotted by executives of Fantasy Records during a Three's A Crowd gig at The Bitter End in New York and was signed to a solo recording deal. His eponymous debut was released in 1971 and produced two hit singles.

In 1973 he would shift to United Artists who released his 'Coast To Coast Fever' which gave Wiffen a Juno nomination.

Later, a devastating back injury forced Wiffen to pursue other interests such as painting and writing poetry. He has since become a published poet and in 1991 displayed his paintings and sculptures.

The album was re-issued on Mousehole Music in August, 2021.