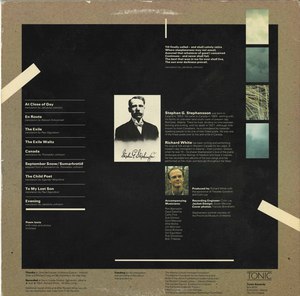 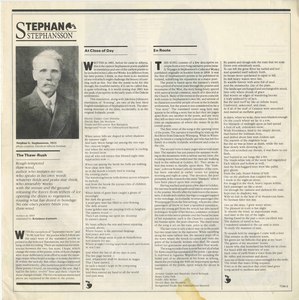 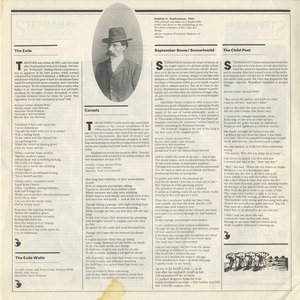 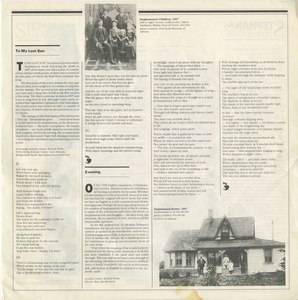 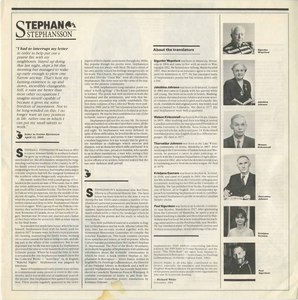 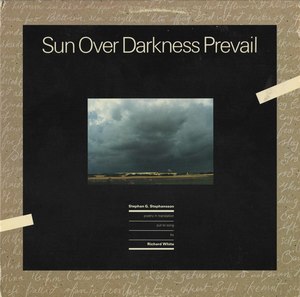 “Sun Over Darkness Prevail” is an album of original folk-style musical settings of poetry, in English translation, by the gifted and celebrated Icelandic-Canadian pioneer-poet Stephan G. Stephansson (1853-1927). It was recorded in the fall of 1984 in Edmonton, Alberta and released shortly thereafter as a vinyl LP. It was my own independent undertaking, paid for with funds raised from various sources and released on my own label, Tonic Records. The album garnered modest success by the standards of its genre, being played and occasionally featured on CBC and alternative radio and selling, through mail-order and at live performances, by the hundreds for several years.

Stephansson’s finely-crafted poetry, with its astute observations of the natural landscapes and human dramas all around him, is as vivid a portrait of the pioneer-immigrant spirit as one will ever find. His irrepressible optimism in the face of relentless physical challenges – his faith that sun shall prevail over darkness – moves me as much today as it did when I first encountered it some thirty years ago, and I believe it can and will touch many others for years to come. “Sun Over Darkness Prevail” contains settings of just eight poems, scarcely a speck of Stephansson’s huge oeuvre, but it somehow seems to capture the spirit of his work and thus deserves to be kept alive. Yet it has long been nearly inaccessible, locked away in a physical form – the vinyl LP – that few people use. So after years of equivocation I resolved to re-release it in digital format to make it available to a new audience. Unfortunately, the master tapes of the album were lost years ago so a new digital master had to be created from a vinyl LP, a less than ideal arrangement but one that has turned out to be surprisingly successful.

Stephansson came to my attention in the early 1980s. Though born in southern Ontario I had been living in Edmonton since 1972, at first attending university and then trying to establish myself as a singer-songwriter. This meant, of course, having to make a living through other means, and by the end of the 1970s I was working intermittently but fairly steadily as a writer of educational materials for various branches of the growing Alberta government. A lengthy placement at the Provincial Museum of Alberta in the early 1980s gave me some expertise scripting museum exhibits, and soon after that I was hired by a local design firm to develop the contents of a small interpretive exhibition being built alongside the newly-restored home of a pioneer farmer I had never heard of named Stephan G. Stephansson. The two streams of my life thus merged, and “Sun Over Darkness Prevail” was born a year or two later.

Musically, the album strikes me now as an intriguing reflection of Edmonton at the time. The city was a small but vibrant place, and everyone seemed to be involved in everything. Strict boundaries between musical styles scarcely existed; even the traditional border between ‘high’ and ‘low’ culture was rather porous. It seemed not the slightest bit odd to hire a jazz trumpeter, an old-time fiddler, and a pop-rock electric guitarist to accompany a singer-songwriter from urban Ontario singing translations of a pioneer Alberta farmer’s poetry, one of the translations being by a small-town insurance agent and another by a university president. And the project’s ‘multiculturalism’, so noticeable now, was not even mentioned by those of us doing the work – though it did, admittedly, provide opportunities for fundraising. Such was Edmonton, Alberta in the early 1980s.

Anyone who listens carefully to this album and reads the background material will see how many people contributed to making it what it is. It so happens that two of the most important contributors died recently, prompting me to reflect on my good fortune at having them involved. One was the guitarist Gaye Delorme, whose extraordinary skill and versatility stand out on every track he played. His parts – which he devised on the spot, in the studio, with minimal guidance from me – essentially define three or four of the songs. The other was the recording engineer Colin Lay, a genial and unmistakably well-educated Englishman – he apparently had a graduate degree from Oxford – who grasped and appreciated the project from day one and who not only made everything sound just right but who also, in many ways, guided it to completion.