West, Mel and The Meteors - What a Wonderful World 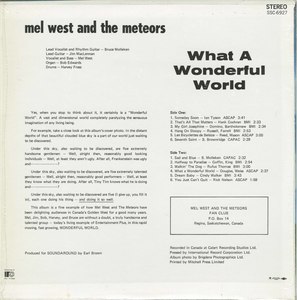 Mel West & the Meteors LP back 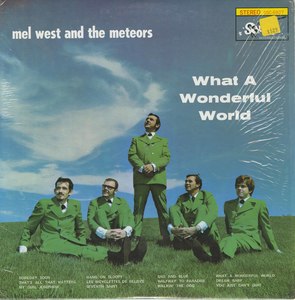 What a Wonderful World

By the end of 1960 Mel was able to find another musical outlet. Gene Dlouhy was looking for someone to fill bass and guitar duties for his big band and Mel got the call. The band would tour western Canada and the western U.S. on and off for the next two years, providing ample road-experience for Mel.

This endeavor ran its course for Mel by the end of 1962 and he decided to retire from the road to focus on raising his young family. Over the following year he would pursue this goal while also getting a job driving trucks for Mayflower Van Lines. By the end of the year he felt the urge to get back into music and began plans to put a new group together.

In 1964 he'd reform the group as Mel West & The Meteors . Mel, watched the group go through many personnel changes over the following months (the only constant members were Jim Roberts, and Bruce Molleken). He was fed up and was about ready to call it quits. He changed his tune when he met (Guitarist/Singer) Jimmy McLennan.

Jimmy had a great knowledge of music theory and was able to arrange and compose for the group, which would prove to be a key asset. Shortly after their meeting, they began searching for more musicians to fill out the core of the group. In the following months they found what they were looking for with keyboardist Bobby Brownridge and drummer Billy Wright.

With the core line-up in place and Mel's ambition restored, they took an honest swing at the industry. Over the following two years they would perform live frequently. They'd also try to make radio and TV appearances as they became more popular, in an attempt to land a record deal.

Nearing the end of this 2 year adventure, Bobby and Billy decided to quit and pursue other careers. It was back to square one for Mel, but his luck would change. The reputation his band was getting had meant that this time, there'd be no shortage of willing and qualified musicians to replace them. Mel put out the word and along came singer/keyboardist Bobby Edwards and drummer Harvey Frasz; Both formerly of the Checker Lads.

After solidifying this line-up, they began a steady schedule of touring, TV performances and recording. Early on, by the end of 1966, they would attract the attention of Earl Brown; owner of the Regina-based "Soundaround" label. They'd release their first 45 Sad And Blue/When You Hear Me Knockin' in late 1966 to mild success.

The minor success of Mel West & The Meteors' debut single caught the attention of Red Leaf Records in Toronto. They would record a Christmas themed single for the label under the name Chamber of Commerce North Pole, Canada.

The Christmas themed single would prove to be another minor success for the group so the guys at Red Leaf convinced them to record another one under their own name. The Seventh Saint/Marilyn would come out in early 1967 to again, minor success. Frustrated at having no serious breakthroughs with the record buying public the group would hit the road again later that year.

They would continue to tour and do TV and radio appearance as 1967 became 1968 and almost 1969. They were able to consistently pack clubs and small venues but were unable to achieve any sort of lasting mainstream success.

In late 1968 they would head back to Regina and reunite with Earl Brown's Soundaround label. They began recording a 12 song album (featuring rerecording's of their previous A-sides [under the name Mel West & The Meteors] "Sad And Blue" and "The Seventh Saint") and a non-album 45 Saskatchewan/The Banana Boat Song. Both would be released in 1969 to minor success.

Fed up with not being able to break through to a wider audience after several meaningful attempts, Mel would disband the group by 1970. They released a number of quality singles and a great album between 1966 and 1969, here's hoping they see a reissue.
-Written & Researched: Aaron Lusch
aaronlusch@hotmail.com