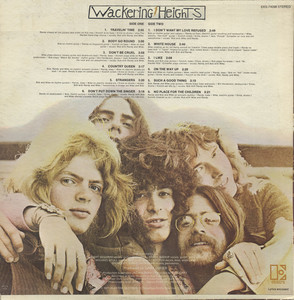 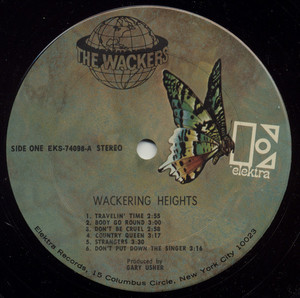 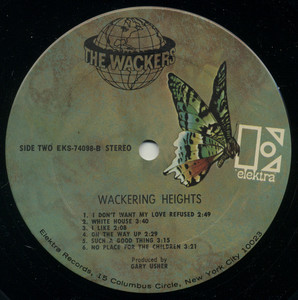 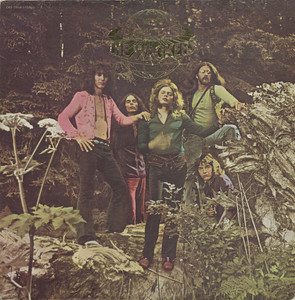 At a time when album-oriented rock was moving toward more self-consciously progressive forms, the Wackers were one of the few bands to move in the opposite direction. In their three Elektra albums of the early 1970s, they set out to, as guitarist and singer-songwriter Bob Segarini states today, make "a full goose bozo run at re-creating the British Invasion sound, with 12-string guitars, bass, drums, and soaring three-part harmonies. We were out of time. We had sort of a glam look, and we played and sounded like the Beatles." They didn't sell records like the Beatles, however -- a fate that also befell some of the few other groups of the era with a similar approach, such as the Flamin' Groovies and Big Star.

The Wackers grew out of another Elektra group, Roxy, whose sole and self-titled 1969 album (reissued on CD by Collectors' Choice Music) was almost entirely comprised of Segarini songs. Also in Roxy was multi-instrumentalist and singer Randy Bishop, who wrote the sole song on Roxy not composed by Segarini. As Roxy neared the end of their touring days, Segarini and Bishop sent a postcard to Elektra founder and president Jac Holzman to inform him they were considering forming a new band to be called either the Wackers or Ernie and the Incredible Chickens. "Ernie and the Incredible Chickens actually was gonna be the name of it," says Segarini. "But we liked the Wackers, 'cause one of us was reading a Beatle biography on the road, and we found out that 'hey wack' was a Liverpudlian expression for 'hey friend.' We thought Wackers was kinda cool because it was completely, totally out of touch with what was going on. [We] put the Wackers together when Led Zeppelin was getting huge. We all hated Led Zeppelin, Pink Floyd, all the pretentious crap going on. There were no songs, just musicianship. We wanted to play little three-minute songs. I wanted to recapture that joy of playing the jangly guitars and three-part harmony, and cool songs and hip clothes. So we went with the Wackers, and they tried unsuccessfully for six months to get us to change the name. We liked it."

The Wackers were formed in the small Northern Californian town of Eureka by Segarini, Bishop, and singer-guitarist-keyboardist Michael Stull. "We had all met, hung out, and worked together in L.A.," Bob remembers. "Basically, we'd write songs and sing constantly in living rooms. Then at night, we'd get drunk, go out to one of the bars, and play for free, for beer. We did that for weeks, and I got a phone call from Elektra going, 'You owe us some more records.' And I'm going, 'Fine. But I'm not coming to L.A. to do it. I got a great band called the Wackers, and we'd love to make a record, but we'll do it in San Francisco.' They go, 'Ah, we're not sure about that. Who's going to produce it?' And I went, 'Well, I don't know. Who do you got?' For the next few weeks, people would call from L.A. and I would talk to them. I wasn't really impressed with anybody. Then one day I got a phone call from a guy named Gary Usher."

Usher was a major backroom architect of 1960s Los Angeles rock, having co-written some Beach Boys songs (including "In My Room" and "409") with Brian Wilson, and done some renowned albums as a producer, particularly the Byrds' Younger Than Yesterday, The Notorious Byrd Brothers, and Sweetheart of the Rodeo. "The guy had a phenomenal history," enthuses Segarini. "Because I know my rock lore, I knew who he was, and we talked. We're on the phone for like two-and-a-half hours. What sold me on him was, at the end of the conversation he goes, 'Do you know why bums drink their booze out of a paper bag?' I said, 'No.' He said, 'Because they don't want to know when the end is coming.' I went, 'Alright, I'll talk with you.' I called Jac Holzman the next day and said, 'I like this Gary Usher guy. So I'm good with that.'"

Continues Bob, "About a week after the conversation with Jac, Elektra calls back and says, 'Usher's gonna come up to hear the band.' So he comes to Eureka, which I thought was really kind of cool, and we have a big dinner at Mike's mom's house. We sing three-part harmony at the kitchen table and he was floored, of course. We're getting ready to go out and play a set at the Purple Haze for him, and he goes, 'So you guys think you're better than the Beatles?' We didn't even blink. We all went, 'Yep.' And he cracked up. He goes, 'I have asked every band I've ever worked with if they're better than the Beatles, and none of them said yes, let alone did it without hesitating. So you're on.' And that was how we started our relationship with Gary."

The quintet that recorded the Wackers' debut album, Wackering Heights, was completed by bassist Bill "Kootch" Trochim (who'd played with Segarini in the late 1960s in the Family Tree) and drummer Ernie Earnshaw. The more pop-rock- and vocal harmony-oriented sound they were pursuing was reflected not just in the LP's material, but also its production. "We were an anomaly at the time, and proudly so," declares Bob. "We knew that people still loved that music, even though radio had quit embracing it. The reason that all three Wackers albums are so acoustic for the most part is because everything we did always started around a kitchen table or a living room coffeetable. We could entertain at a moment's notice anywhere, even without a guitar. We'd go into a place called the Keg in Arcata and be standing in line waiting to order burgers and get a pitcher of beer, and we would sing 'Nowhere Man.' The place would go nuts, and we'd get free hamburgers. The records always reflected what the producer heard, and the producer always heard us around a kitchen table."

Where every song but one on the Roxy album had been penned by Segarini, in the Wackers a more collaborative songwriting process was at work. The tracks (except for a cover of Elvis Presley's "Don't Be Cruel") were sometimes credited to Segarini, Bishop, and Stull; at others to Segarini and Bishop, or Segarini and Stull; and at others, to either Segarini, Bishop, or Stull alone. "Travelin' Time" was written by Segarini, Bishop, and Rita Coolidge, with whom Bob and Randy worked in the early '70s, singing backup vocals on her first album. "Things would come together so fast and fully realized," remarks Segarini. "'Such a Good Thing,' I dreamt that song from beginning to end, almost every word. It was so defined in my dream that I woke up and ran downstairs to grab a guitar so I could remember it. I ran downstairs, and Randy and Mike were already in the living room with a couple of guitars singing around the coffeetable. I grabbed my guitar, sat down, and said 'listen to this, listen to this, listen to this.' I found the first chord and sang them the song. By the time I got to the end, they already had the harmony parts for the chorus, and the three-part harmony parts for the oohs and aahs in the middle.

"It was the most fun I ever had in a band, because it wasn't work. That was the excitement of the Wackers. It was like rolling off a log. You couldn't not enjoy it. Everybody knew where to go for their harmony part. I love Wackering Heights, because you can sort of hear the joy of it." As to what made their vocal harmonies special, he adds, "If you listen to Beatle records, most of their harmony is two-part. I grew up learning how to sing by singing the unsung third part in Everly Brothers records. So when the Beatles came out, I would sing the third part that wasn't there on those records. Like 'If I Fell'; I'm the only person on earth who can sing a successful third part to 'If I Fell,' especially the really difficult part in the bridge. I just figured it out by singing along with it. So basically the Wackers is harmony-heavy because we always included the part that nobody ever did. When there were great things like 'Nowhere Man' where they did do the three parts, we built on that. Kootch also sang, so occasionally we would use four parts on tunes." The Beatles weren't the only influences that could be heard in the harmonies; as Segarini told Gary Sperrazza and Lester Bangs for their Wackers article in Shakin' St. Gazette, "Jac Holzman once told me we sounded like a cross between the Grateful Dead and Crosby, Stills, Nash & Young."

Particularly emblematic of the Wackers' concise, melodic aesthetic was one of the album's strongest tracks, "Body Go Round," which to Segarini remains "one of my favorite songs I wrote. It's based on a short poem I used to play between sets at the Whisky A Go Go. The Family Tree were a mainstay at the Whisky A Go Go in L.A., and they used to show little short films there, light shows and stuff, between sets. There was this little short film that started -- it looked like space, like the planets and little dots of stars and stuff, and it would pull back, and it would be a square of black. You'd pull back further, and it would be a picnic blanket, and two people sitting on a picnic blanket. Then it would pull up further, and you would see they were in a park in a city. It would pull back further, and the city was in a state. It would pull back, and you're in North America, and you'd see the whole world. Then the world disappears, and you're out in space. Then it comes back out, and you're coming out of that little black square -- it was a black and white film -- in the picnic blanket. It just went over and over and over. That stuck with me, and a couple years later, I wrote 'Body Go Round.' That song is a real simple statement: If I love you, and you love me, what can it hurt to go around together, to be in love? That's what that song is about. That song is all it is. I like the circular feel of it."

Like the material, the production on Wackering Heights was less ornate than much other rock music in 1971, when the album saw its release. "We went down to Wally Heider's [studio in San Francisco] and cut thirteen complete songs, mixes and all, in ten days," Segarini informed Shakin' St. Gazette. "We were so hot -- neither Randy nor I had been in a studio for a year and a half -- that we just went berserk. In the first four days we recorded nine songs, tracking vocals with no overdubs. It was just time, we couldn't wait, not even long enough to make sure or bully our way to having the album sound like we'd dreamed it would."

When the first album was recorded, according to Segarini, "Usher told us that if it did well, meaning critically or sold a bunch of records or whatever, we could go someplace exotic to cut the next one." Wackering Heights did not make the charts, but it must have done well enough in some regard for Elektra to give the go-ahead for another album. Largely recorded in Montreal, it would give the band some opportunity to reflect their harder-rocking live side -- a story told in the liner notes to the CD reissue of Hot Wacks, also available on Collectors' Choice Music.
-Richie Unterberger (liner notes)