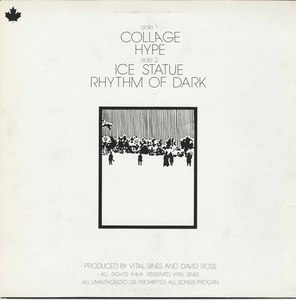 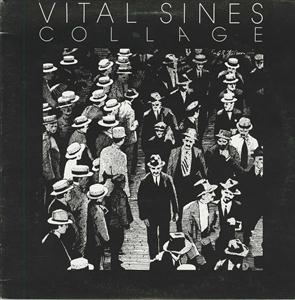 During the the 80's, many Torontonians (and others in the surrounding areas) were graced with a superb music scene. A lot of great bands came from this era, and grew a cultish stigma that follows them today. A few of these bands, The Spoons, Chalk Circle, are among the bigger names in this group. There was also an underlying group of amazing bands that perhaps failed to achieve greatness, but did manage to notch their mark into the musical history in the area. Vital Sines was one of these bands, and thanks to a Toronto radio station CFNY (Spirit Of Radio) 102.1, managed to gain some status and following. Really only known for their one single that managed to get airplay on the Toronto station, "Collage" grew to be an indie hit, and had regular airplay and clubplay.

This EP finds it's sound in the likes of early Killing Joke, though they do have a bit rougher sound. The title track "Collage" is a great tune, and always finds it's way onto my table. "Hype" could easily have been a Killing Joke b-side, and is a decent track. The rest of the tunes are 'ok', but worth a listen. These guys faded pretty fast, and members split and formed other factions in Canadian musical history. The drummer, Glen Milchem had success with Andrew Cash, Big Sugar, and later Blue Rodeo. He is now recording as The Swallows, and you can find that in any store or Blue Rodeo show. Kudos to these guys for adding to the Toronto Indie scene in the 80's, that time was a brilliant era in Canadian music.