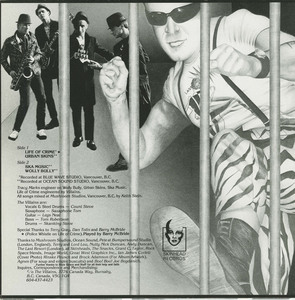 Villains - Life of Crime BACK 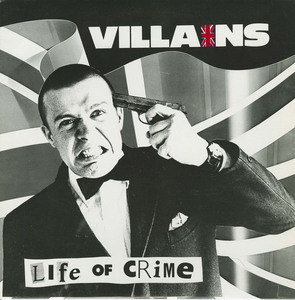 The Villains - a true story! Very few bands in the history of popular music have experienced exploding on to the national music scene like Canada’s VILLAINS. Shortly after arriving in Vancouver, the band found itself in the middle of an event that made front page headlines and received hourly updates on local and national radio and television. Performing in front of a packed club in downtown Vancouver, the VILLAINS were arrested on stage in the middle of a set by Canadian Immigration Officers. Picture the band stepping into a paddy-wagon, dressed in full ska / punk gear, tipping their pork pie hats to the photographers. Oh, did I forget to mention that that band were all skinheads? Remember, this was 1980 and a full band of skins was shocking enough and the fact that most of the media was not familiar with the term “Ska” and they weren’t sure how to describe the Villains music added to the buzz. When the VILLAINS legally returned to Canada they went on a ska crusade across Canada leaving a wave / ripple effect of ska music and non stop dancing fun times. Setting attendance records and breaking bar sales records at colleges and dance clubs everywhere they played. The Villains approached everything with their particular wacky sense of humor. The Villains live shows are legendary because of the unpredictable stage antics which have included gaffer taping the sax player to a high chair and shaving his head for an encore, or when they put the 6 ft 6 in. guitarist on stilts making him tall enough for the lead singer to run between his legs. So, the Villains haven’t played live since 1986 and leave a legacy of headlining the Commodore Ballroom 11 times, selling out the Opera House in Toronto, headlining the #1 dance venue in the world at the time, the Famous Ritz Ballroom in NYC and legions of crazed dancing Ska fans from coast to coast.

Well, maybe they were before your time, or you weren't in Canada from 1980 - 1986 because if you were, you would have heard of the legendary Canadian based Ska Band "The Villains". Count Steve and Tom Perry got together in Vancouver, B.C. in the late 70's, saw opportunity, returned to the UK and put together a hard driving ska band in London with the full intention of becoming a Canadian / N. American Ska Band of some note. The Villains did come to Canada and toured non-stop across Canada for over 5 years, setting attendance and breaking bar records from coast to coast. This amazing band: (* Tom Perry - Sax, * Dave Neal - guitar, vocals, songwriter, * Count Steve - lead vocals, steel drums, * Tommy Robertson - bass, vocals * Skankin Steve - drums) basically went on a Ska Crusade for 5 years. At the time there were only 1 or 2 other ska bands playing in Canada.