Versage, Wayne - Gentle on My Mind 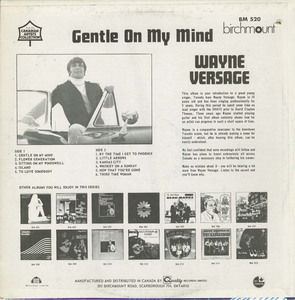 Wayne Versage-Gentle On My Mind BACK 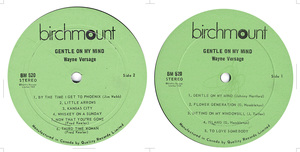 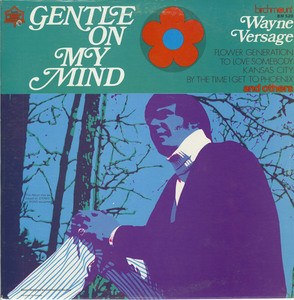 Gentle on My Mind

Wayne Versage was a Toronto native born in 1945. He got got his professional singing start at age 18 fronting the Shays before David Clayton Thomas came along.

After getting the boot as singer for The Shays, Wayne stagnated for a year but ultimately decided to pick up the guitar in 1966. He began playing locally, beginning to make a name for himself. This got a number of labels excited in the young singer, and in 1969 he recorded his lone album for Birchmount Records.

This record features top-quality musicianship, great song choices and a reunion of sorts; backed by Fred Keeler along with the Shays. A number of these songs are Canadian originals ("Flower Generation" [The Fringe] & "Island" [A Passing Fancy] both written by Greg Hambleton, "Sitting On My Windowsill by Jay Telfer and Now That You're Gone & Third Time Woman written by Fred Keeler and featuring his singing).

LINER NOTES:
"This album is your introduction to a great young singer, Toronto born Wayne Versage. Wayne is 24 years old and has been singing professionally for 5 years. During this period he spent some time as lead singer with the SHAYS prior to David Clayton Thomas. Three years ago Wayne started playing guitar and his first album certainly shows how far an artist can progress in such a short space of time. Wayne is a comparative newcomer to the downtown Toronto scene, but he is already making a name for himself - which, after hearing this album, can be easily understood. We feel confident that more recordings will follow and Wayne has plans to travel extensively all across Canada as a necessary step in furthering his career. Make no mistake about it - you will be hearing a lot more from Wayne Versage. Listen to the record and you'll know why."