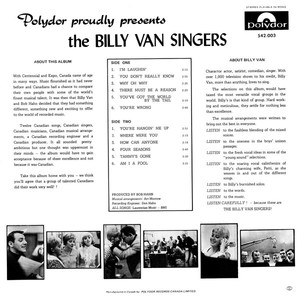 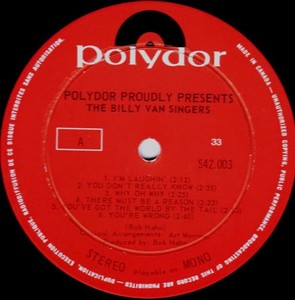 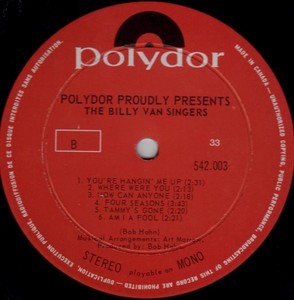 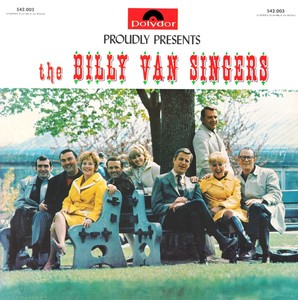 liner notes: With Canada's Centennial and Expo 67, Canada came of age in many ways. Music flourished as it had never before and Canadians had a chance to compare their own people with some of the world's finest music talent. It was then that Billy Van and Bob Hahn decided that they had something different, something new and exciting to offer to the world of recorded music.

This album features twelve Canadian songs, Canadian singers, Canadian musicians, Canadian musical arrangements, a Canadian recording engineer and a Canadian producer. It all sounded pretty ambitious but one thought was uppermost in their minds - the album would have to gain acceptance because of sheer excellence and not because it was Canadian.

Take this album home with you - we think you'll agree that a group of talented Canadians did their work very well!end liner notes

Billy Van recorded two 45's celebrating the Canadian Centennial on the Apex label in 1967. Billy Van was born William Allan Van Evera in Toronto and was also an actor, satirist, and comedian; most notably for the TV series House of Frankenstein (Vincent Price) as well as the CBC TV comedy series Nightcap.

Bob Hahn also recorded a single entitled Canada b/w Montreal in 1967 for RCA Victor 57-3420. Bob Hahn was born in Kindersley, Saskatchewan. He played an integral role in the development of CanCon radio legislation and was a leader in the Canadian jingles industry.

The album was produced by Bob Hahn. Musical arrangments and recording engineer was Art Morrow. The album was released on Polydor 542.003 in 1968.
-Robert Williston