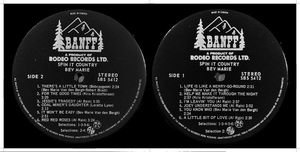 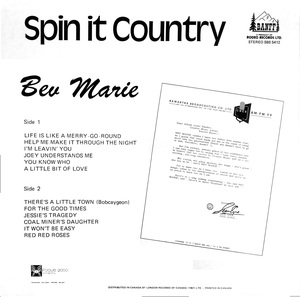 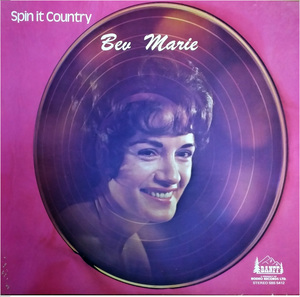 Bev Marie Van Den Berghe began her singing career at an early age in her hometown of Bobcaygeon, Ontario. Along with her father, Robert Bradt, and brother Malcolm, Bev won many an award at various country fairs for her vocal efforts. T.V. and radio appearances followed, and accompanied by her brother, Bev staged a number of shows. For eight months, Bev Marie acquired much experience both as featured singer and as bass player for Bud Roberts and the Bordermen as she traveled the night club circuit about Ontario and Québec. Besides being a fine vocalist and bass guitar player, Bev is also experienced in piano, accordion and drums.

This, Bev's first L.P., contains three original songs, two of which were written solely by Bev and one with which she teamed up with a neighbour. "Moon Myth" and "No Not Me" are Bev's own compositions. "Is Loving Me A Habit (With You)" was a co-operative effort by Bev and Shirley Hele, Bev writing the music. The other songs on the album are standards by Tammy Wynette, Jeannie C. Riley, and other well-known artists.
-Rex Glen, Ont. rep. and reporter for the Country Scene, Florida