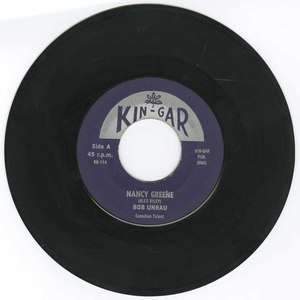 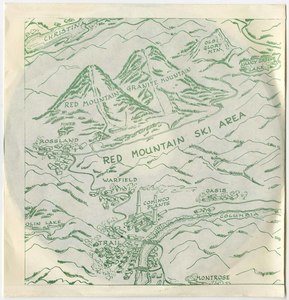 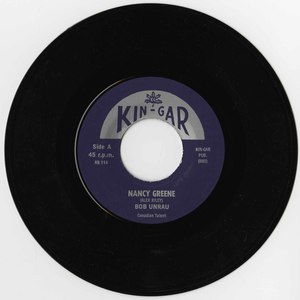 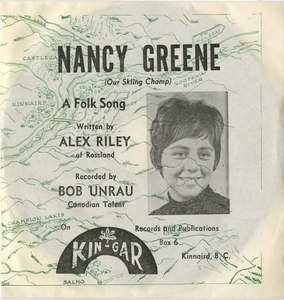 Here is a catchy ditty about Canada's Ski Queen and her hometown ski village of Rossland, in the Kootenays of British Columbia - brought to you by the Unrau family.

"Dad grew up in Saskatchewan. He played for radio and tv shows as a young adult. He met and married my mom in Kaslo, BC when he was 25 and at that point, music became more recreation than career. There are 4 of us kids, born and raised in Kaslo.

Dad really didn’t sing folk music, this was a step out on a limb for him. He was very country – and very creative. Made up his own version of The Rhinestone Cowboy for one of his co-workers and sang it as “he’s a truck driving cowboy”. He doesn’t play anymore even tho he yearns to. He has very stiff fingers and parkinsons. We recently bought him a tuner, new guitar strings and stuff but he hasn’t picked I up. Has flooded me with memories of him singing and campfires……Everyone in his retirement facility is asking for him to play the songs."

Chorus:
Nancy Greene oh Nancy Greene
Fairest flower ever seen
The sun will shine, the moon will beam
Down on the one our Nancy Greene

Our skiing champ, our Canadian queen
Has a girl who had foreseen
That one day her name would stand
For glory gold in the mountains lands

She is our gem, she is our pro
She’s our only champion girl
She gets to us our fair domain
Her hearter of to win us fame

Nancy Greene was Canada's top ski racer through the 1960's, winning gold and silver medals at the 1968 Grenoble Olympics and overall World Cup titles in 1967 and 68. Her total of 13 World Cup victories is still a Canadian record. She won 17 Canadian Championship titles in all disciplines.

Retiring at age 24, Nancy married Al Raine and together they have made skiing their life's work. They have been instrumental in the development and promotion of ski tourism in British Columbia, first at Whistler and now at Sun Peaks Resort just north of Kamloops. Nancy is Director of Skiing at Sun Peaks, Chancellor of Thompson Rivers University and was appointed as Senator for British Columbia, Government of Canada in January, 2009.

In November 1999 Nancy was named Canada's female athlete of the century, no doubt not only because of her athletic accomplishments but because she has continued to contribute to the sport she loves. The Nancy Greene Ski League, for example, is where young Canadians get their start in ski racing.
http://www.nancygreene.com/

listen to her story here: http://archives.cbc.ca/sports/skiing/topics/1577/