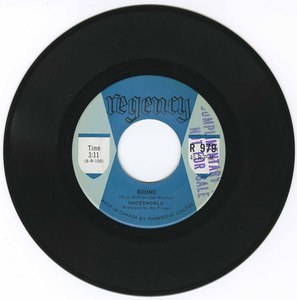 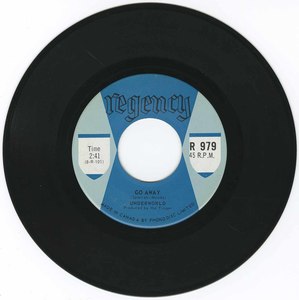 The Underworld were a garage band managed by Jed McKay (of Toronto combo It's All Meat) along with fellow Meatster Rick McKim, whose father was rather conveniently positioned as an executive at Phonodisc Canada and who would eventually help secure a recording deal for the band, these Regency sides being their lone wax offerings.

A rather tame piece of mid-sixties garage rock released in 1968, though sounding much more like 1965, 'Go Away', launches into a frenetic r'n'b workout, with vocalist Ken Ketter, aka 'Mondo', affecting an acerbic scowl circa early Them. A totally unfettered psych guitar solo two minutes in by Jim "Spanish" Carmichael is what places this disc firmly post-67. Otherwise, it hardly warrants the excitement amongst the vinyl pinheads. The flip is a more sedate affair replete with the requisite Jaggeresque posturing of the day.

Listening to their superior unreleased demos, like the freaked-out acid guitars of 'The Strange Experiment of Dr. Jarrod' or the punkier 'Love 22', it is clear that this 7" was more an attempt at cracking the CHUM-AM (Toronto) hit machine than at truly reflecting the band's no doubt deserved reputation on the local club circuit. 'Go Away' can be found on the 1983 comp Nightmares from the Underworld, while drummer Gil Moore eventually surfaced in the seventies bashing skins for metal burnouts Triumph
-Michael Panontin