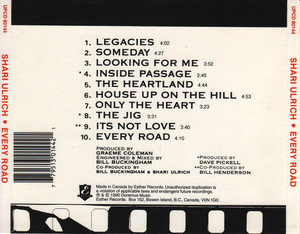 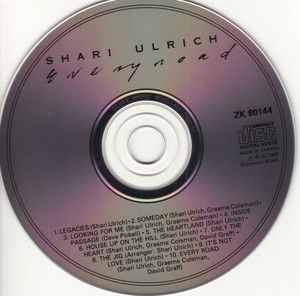 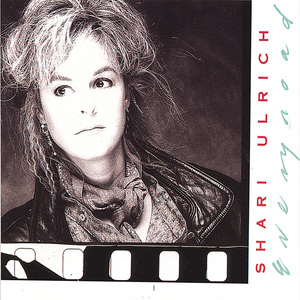 Intelligent songs & late 80's pop production with great vocals. After several major label LP's both solo and with bands, this is the first independent CD from this veteran Canadian artist.

A recent inductee into the BC Entertainment Hall fo Fame, SHARI ULRICH has fashioned an extraordinarily varied career for herself since coming north from her native San Rafael, California to British Columbia in the early 70's. A Juno award winner, she has excelled as a singer, songwriter, multi-instrumentalist, television host, television composer and script writer, and theatre performer.
In 1973, with Rick Scott and Joe Mock, ULRICH formed the singular and quirky PIED PUMKIN STRING ENSEMBLE, contributing violin, mandolin, flute, dulcimer, guitar, piano and saxophone. In 1976 she was hired to tour with folk artist VALDY as part of his backing group, which went on to become the Juno Award-winning HOMETOWN BAND. Shari penned her first song "Feel Good" for the group's second album and its success as a single launched Shari into her solo career as a singer songwriter when the group disbanded in 1978. Her second LP, ONE STEP AHEAD won her the Juno's most promising female artist for 1981. That persuaded MCA to sign ULRICH to an international record deal and, with long time producer and collaborator, Claire Lawrence, she released her highly acclaimed TALK AROUND TOWN. A major shake up and purge of the label just a week before its US release left Shari without a label, but more determined than ever. After a stint in Toronto and LA, Shari realized the west coast of Canada was truly home and settled into her own studio to produce her next solo album.

In 1989 she released EVERY ROAD, which was followed by the compilation of her first three albums, THE BEST OF SHARI ULRICH.
1989 also saw the formation of UHF - with BILL HENDERSON ("Chilliwack") and ROY FORBES ("Bim"). The trio went on to tour extensively and record two albums.

In 1996 Ulrich branched out again, taking on a lead role in the Vancouver Arts Club Theatre's production of "Tapestry", a tribute to Carol King. She then set about writing and recording her next solo work "The View From Here" with partner Bill Runge contributing his signature brilliance with string arrangements and soprano sax.

1998 saw the revival of THE PIED PUMKIN for sold out tours and two CD releases: "Plucking deVine" - a compilation of the best of all those worn out LP's and the live CD, "Pied Alive". The group is actively touring.

Shari tours with her 16 year old daughter Julia Graff adding fiddle, guitar and vocals, and Bill Runge (on piano, soprano sax, accordion & flute - In addition to shows with UHF and the Pied Pumkin. She also produces the Bluebird North series of songwriters showcases for the Songwriters Association of Canada in Vancouver and nationally.