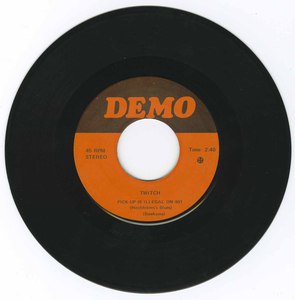 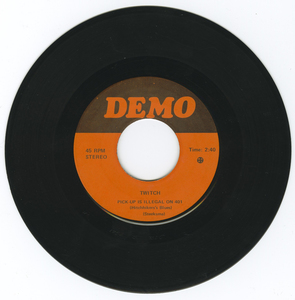 In the late 60's and first year or two of 1970's, Twitch arose from the ashes of the last version of "The Cry For Justice", which included Ian Steeksma and Steve Perry. Wanting to try something different, also to perhaps cash in on the growing trend for bands to put on a show, and using theatrical makeup, Ian Steeksma, Steven Perry, Rick Lang and Mike Brown eventually made up the first Twitch to begin touring the local clubs and schools in Vancouver. In 1973, Rick left and the band was joined by Ian's younger brother Colin on bass.

Using Colin's and Steve's additional writing skills, the band evolved into a very theatrical performance utilizing many dark and near-Satanic themes; the show climaxed with the drummer Mike being shot on a huge cross.

Steve and Mike left the band, which left Ian and Colin to re-form.

The next incarnation of Twitch was to be based on a more good-time atmosphere as the prior dark side antics were eventually even getting to theband members, but also utilizing an original storyline of songs, a lot of the New Wave and Punk music coming out of New York, and still using theatrical makeup and choreography.

Twitch was a local rock group known for it's bizarre stage show, theatrics and theme inspired fast rock. In one part of the show.the drummer, Mike Brown, was shot from a platform with a fake revolver and dove (fell) over the drum kit on a riser and landed writhing around in "pain" on the stage next to the rest of the band spewing fake blood. When the "bullets" hit him, a pressurized blood bag hidden in his mouth exploded for effect.

Although that and the rest of the show was very successful even after seeing it several times including Grey Cup weekend, the owners at the time were never able to erase or paint the "blood stains" off the wall until it was demolished..
-Ian Steeksma