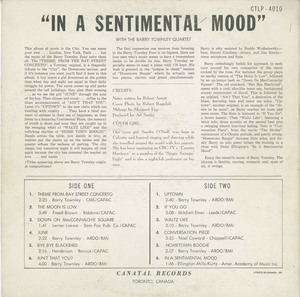 Barry Townley Trio - In a Sentimental Mood BACK 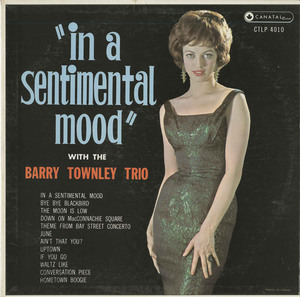 In a Sentimental Mood

This album of music is the City. You can name your own… London, New York, Paris... but the music of the Barry Townley Four suits them all. The “THEME, FROM THE BAY STREET CONCERTO” (a Townley original), is a rhapsodic tribute to the "City", the Downtown section, and if it's romance you want you'll find it here in this album. A boy meets a girl downtown at the golden time when day and night are equal in their daily struggle for power. The moon comes up and peeks around the tall buildings; they plan their evening… as we see the girl "JUNE" through the eyes of the boy. Then dinner and music ... coffee to the blues accompaniment of "AIN'T THAT YOU". Later it's “UPTOWN" to the new clubs which are bustling with vitality… They have a brief moment of sadness in their sea of happiness, as they listen to a haunting Continental Blues, the memory of youth is short and soon they are caught up in the swinging whirl of "WALTZ LIKE" and the rollicking rhythm of "HOME TOWN BOOGIE'. Hands across the table, now deeply in love, as waiters put the chairs up on the tables and the pianist echoes the sadness of parting. The city sleeps, but tomorrow night it will happen all over again because the city has cornered the market on love…. and music.

The first impression one receives from listening to the Barry Townley Four is its bigness. Here are four men who's music seems to have a tremendous desire to be double its size. Barry Townley especially seems to want a piano with 176 keys. His wish is granted in the "tongue in cheek" version of "HOMETOWN BOOGIE" where he actually uses two pianos, electric and grand simultaneously.
Barry is ably assisted by Buddy Wyshniowsky--bass, Harold Ginsberg-drums, and Jim [Pat] Riccio-tenor saxophone/flute. Barry refreshingly builds his approach to each tune around his own conception of the mood evoked by the tune. For instance, the group plays an earthy version of "The Moon Is Low," followed by an up-tempo bash on "Down On MacConnachie Square." The old standard, “Bye Bye Blackbird” opens with a cool, alto-like tenor sax, background sounds reminiscent of Ravel. This is followed by an original, “AIN’T THAT YOU” a derivation of the blues, featuring bass and tenor sax solos. “UPTOWN” another original, is an example of the "desire to be more", as Barry reaches for more and more notes. The flute is featured in "If You Go" a lovers lament. Then "Waltz Like", featuring a tenor solo; drum accents on the second beat give a swinging almost four-four feeling. Next is "Conversation Piece", from the movie "The Shrike" reminiscent of a Chopin prelude, and gently swung. "Hometown Boogie" features flute solos, and finally Barry on solo piano brings the evening to a close with Duke Ellington's "In A Sentimental Mood" Enjoy the versatile music of Barry Townley. The playing is flexible, moving, romantic and, most of all, it swings.
- Robert Arnott