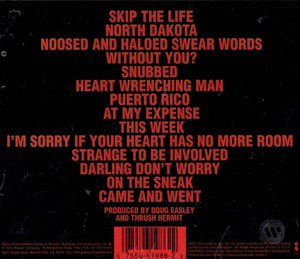 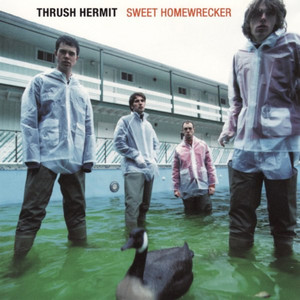 Sweet Homewrecker is the first full-length album by Canadian rock band Thrush Hermit. It was released on Elektra Records in 1997.

They signed with Murderecords, the label of fellow Haligonians Sloan, in 1994 in time to release their Smart Bomb EP, which featured songs such as Benvie's "French Inhale" and Plaskett's "Hated It". The former would get some rotation on MuchMusic, which then held a reputation for more alternative programming, while the latter would end up in the Kevin Smith film Mallrats.

Following the release of the band's second EP, The Great Pacific Ocean, the group signed in 1996 with Elektra Entertainment which released their first full-length album in 1997, Sweet Homewrecker. The Memphis-recorded album features tracks showcasing the songwriting of Plaskett, Benvie and McGettigan. The album proved a disappointment from Elektra's standpoint however, and Thrush Hermit was bought out of their contract.

After their foray into the United States market, Thrush Hermit returned north to release their final album, Clayton Park, on Sonic Unyon in 1999. Despite the critical success of the record, Thrush Hermit announced their amicable split on September 21, 1999. However, they would do a farewell tour just before permanently breaking up. During the tour, a few shows were canceled due to Plaskett's health. Medical examinations showed that he had a dangerously low level of white blood cells. Later examinations showed that he was back to normal and could continue the remaining shows. Thrush Hermit played their final show on December 2, 1999 with The Deadly Snakes and split up right after.

Plaskett went on to begin a fruitful recording career with his band The Joel Plaskett Emergency. Benvie released a solo record under the moniker "Tigre Benvie", and McGettigan began producing records by Canadian rock acts such as The Flashing Lights. McGettigan also produced records for Plaskett, and later became a member of The Joel Plaskett Emergency. Benvie and McGettigan are now the main members of Camouflage Nights, which features a revolving door cast of musicians.

Thrush Hermit reunited for a brief set following a Joel Plaskett Emergency show at the Marquee Club in Halifax, Nova Scotia, on December 31, 2005.