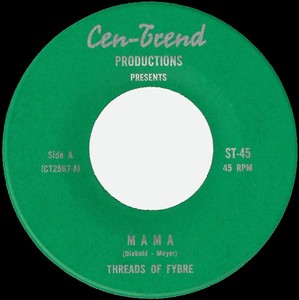 From the tiny village of St. Clement’s near Kitchener, Ontario, the Threads of Fybre were a rather fleeting concern, performing not more than ten times in their entire career. Nonetheless, in true DIY fashion, they did manage to commit themselves to vinyl posterity, recording this double-sider in Toronto on June 25, 1967, just as the mythical summer of love was about to unfold. Fronted - as it were - by Tim Meyer, who doubled up on drums and vocals, this four-piece, like much of 1960s garageland, was a lot longer on attitude than on talent. In fact, the primitive guitar scratchings and rudimentary drumming on A-side ‘Mama’ recall later punk legends Television Personalities at their charming best (which would mean at their worst), while Meyer’s surly vocal ratchets up the rancour a notch with a totally convincing Sky Saxon scowl. Over on ‘Believe Me’ there is more of the same glorious amateurism, though this time the lads bog down a bit in a lethargic mess, with the whole thing unravelling by song’s end.
Michael Panontin