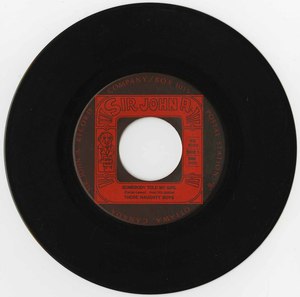 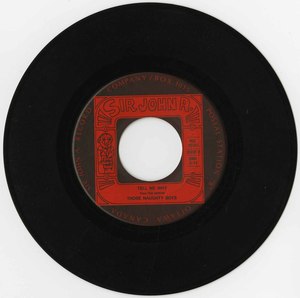 Tell Me Why b/w Somebody Told My Girl

More than any other SJA act, Those Naughty Boys were the epitome of the garage band. In 1965, Bobby Gauthier got expelled from high school for letting his hair grow past his collar. Shortly after this, he got a bunch of teenagers with little or no prior musical knowledge together and formed a group. After only a few practices, they booked some time at H.H. Bloom Studios and cut their first demo. With the help of former Esquires roadie Don Nicholson as manager, they landed a recording contract with Montréal-based Fantastic Records, much to the surprise of some of their rivals. Their first single, "Baby," was issued during the winter of 1966, thus establishing them on the scene. They gigged constantly throughout much of the year and regularly toured remote parts of north-eastern Ontario and western Québec. During such a tour, their van cart-wheeled off the highway, while en route to a date in Maniwaki. They survived uninjured and told the tale the following week when they were interviewed on CJOH-TV's Saturday Date. Being enterprising young men, they invested their earnings in their own Club 400, in Cornwall, Ontario, booking all the major touring acts from Ottawa and Montréal into it. By the time their Sir John A. single came out, the group was on the verge of splitting up. Gauthier had strained his vocal cords and couldn't sing. As the band was booked solid for the next three months, they hired former Eyes Of Dawn frontman, Wayne McQuaid to take over the lead vocals. But the constant touring had taken its toll and dissension was rife. Gauthier had turned down several offers from a little known group called The In-Sect, but once The Naughty Boys' commitments had been fulfilled, in April, he accepted and renamed them The Eastern Passage.