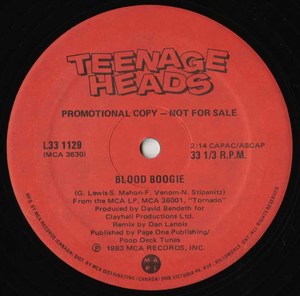 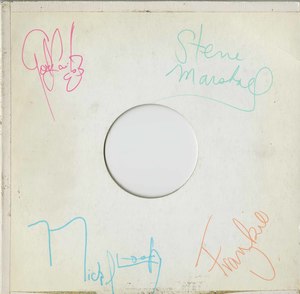 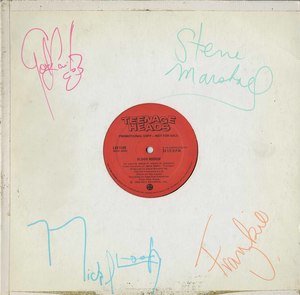 Sitting in a rock music history class with 500 kids at McMaster University in the late 1990s was a shaggy and craggy older student who had as much to teach as he had to learn. He was Gord Lewis, the pioneering, sound-defining guitarist of Teenage Head, Canada’s most revered punk group from the late 1970s.

“Gord and Teenage Head had hit records, toured the country and landed a record deal,” Mike Daley, the musician and musicologist who taught the rock music class, told The Globe and Mail. “They showed that it could be done here.”

By the 1990s, with the band no longer as relevant as it once was, Mr. Lewis had decided to pursue a degree in music. If the syllabus had a section on rises, falls and the dark side of rock ‘n’ roll, he would have earned a credit based on life experiences many times over. Despite its success in Canada, Teenage Head possessed the tragic quality of a band that had come so close to making it even bigger.

“It’s not uncommon for a lot of Canadian bands, being on the brink and then something would happen to stop them in their tracks,” Mr. Daley said.

According to his instructor, Mr. Lewis was sweet and humble, but proud of what he accomplished and conscious of the role he and Teenage Head played in the history of Canadian popular music. Mr. Daley could not recall the grade Mr. Lewis earned in the class, saying only that he had received a passing grade.

Mr. Lewis was found dead in his Hamilton apartment on Aug. 7. He was 65. Hamilton police are conducting a homicide investigation. The musician’s 41-year-old son, Jonathan Lewis, is charged with second-degree murder.

Using a highly electrified 1956 Les Paul Special guitar, the lanky, fair-skinned Mr. Lewis was a melodic buzzsaw and the architect of the sound and look of a Hamilton-formed band that bopped, chugged and sneered with glam-rock esprit, fifties-pop tunefulness and punk-rock effrontery. Teenage Head’s spry debut single from 1978 has been hailed by the band’s biographer as a bubble gum anthem.

“If Picture My Face didn’t hook you in,” Geoff Pevere wrote in his Gods of the Hammer: The Teenage Head Story, from 2014, “your ears were on wrong,”

That said, Teenage Head did have its riotous occasions. Most infamously, an oversubscribed concert at Toronto’s Ontario Place on June 2, 1980, set off a melee. Some 1,000 angry Head fans battled 75 police officers for almost four hours after they were refused admission to the sold-out concert. Commenting afterward on the overflowing crowd at the 12,000-seat amphitheatre, Mr. Lewis likened the scene to “two pound of bologna in a one-pound bag.”

Up to that point, the band’s music had only been released domestically, on the Canadian independent label Attic Records. To capitalize on the notoriety of the wild incident that drew international attention, a series of showcase gigs in New York were arranged in hopes of landing a U.S. record deal.

Before those shows happened, the band’s momentum skidded to a halt on Sept. 6, 1980, when a van carrying them home from a concert ran off a country road and into a ditch near Elora, Ont. “I knew we were going to crash,” Mr. Lewis told the Hamilton Spectator. “You could feel it inside the van.”

The force of the impact broke Mr. Lewis’s back, leaving him and the band out of commission for months. The New York shows were cancelled – a promising opportunity missed. “This was the Head’s turn,” the group’s disappointed manager, Jack Morrow, told The Globe at the time.

The guitarist eventually recovered, but Teenage Head never quite did. While the band continued recording and touring, it had lost its place in line. The guitarist was a fan of sixties television comedies as a child. His favourite quote was believed to have come from an episode of The Flintstones: “A week is a lifetime in show business.” It was a truism, the guitarist would come to learn. He took Teenage Head’s shock reversal of fortune hard and personally.

“I sensed he always felt guilty for the accident that wasn’t his fault,” said Alexander Mair, co-founder of Attic Records.

Mr. Lewis was the architect of the Hamilton-formed Teenage Head and its character sound that bopped, chugged and sneered with glam-rock esprit, fifties-pop tunefulness and punk-rock effrontery.Kris Gelder/Kris Gelder

In 2008, Frank Kerr (a.k.a. Frankie Venom, the band’s effervescent but erratic lyricist and singer) died of throat cancer. The death of his close friend devastated Mr. Lewis. “I knew that I’d never laugh again that much,” he said in the 2020 TVO documentary Picture My Face: The Story of Teenage Head. “That’s one of the things I thought of when he died.”

His mind troubled, Mr. Lewis grew less interested in playing and songwriting. At one low point, he was back at his parents’ house, where his musician friends would stop by to pick him up for rehearsals. One of them was former Alice Cooper bassist Dennis Dunaway, a childhood idol of Mr. Lewis. It had been his fantasy to play with Mr. Dunaway – he had even taped magazine photos of the Alice Cooper band on his bedroom walls.

Now, with Mr. Dunaway at the front door, Mr. Lewis was down, out and suffering from depression. “The idea of playing with Dennis would have been a lot different in his 12-year-old mind than it turned out to be in reality,” said Tom Wilson, a musician, friend and champion of Teenage Head’s legacy. “Gord’s dream had come true, but it was all such a mess.”

Gordon Steven Lewis was born in Hamilton on May 21, 1957. He was second of the seven children of teachers Wendell and Frances Lewis (née Scharbach). It was a musical household – the father, a long-serving member of the Cathedral Christ the King Choir, was a trombonist in high school, but had to quit after he was struck in the mouth with a puck playing hockey.

Introverted but happy as a child, Mr. Lewis excelled as baseball pitcher and as an acrobatic hockey goalie in the style of his hero Roger Crozier.

Mr. Lewis developed a keen interest in music early, initially inspired by the made-for-television pop band the Monkees. “That’s where he got his fantasy idea of what a rock ‘n’ roll band should be,” his brother, John Lewis, said.

The first 45 he purchased was the Monkees’ A Little Bit Me, a Little Bit You. “Watching the Monkees made a tremendous impression on Gord,” said Lou Molinaro, a close friend and former owner of the Hamilton music club This Ain’t Hollywood. “He wanted to be in a band, have fun and be chased by girls.

“Gord wanted to be a rock star.”

Although identified as a punk band, Teenage Head was influenced by artists outside of that scene. Mr. Lewis, who wrote the band’s music, was taken with the audacious presentations of David Bowie, MC5, glam-rock all-stars Mott the Hoople, British space-rockers Hawkwind and, in particular, the androgynously adorned New York Dolls. “The style of Teenage Head was very important,” Mr. Molinaro said. “I’d talk to women who told me that the band looked so good on the back of their early albums that they took pointers on how they should look back then.”

Mr. Lewis and the band were so deeply in favour of the Dolls that when the David Johansen-led glam merchants played a five-show run in 1976 at the Queensbury Arms in Toronto, a Teenage Head contingent made the journey from Hamilton to watch them every night.

According to guitarist John Catto of the Canadian punk band the Diodes, Teenage Head played their first Toronto show at the Colonial Underground on March 28, 1977. “They had been around in Hamilton for a couple of years and were far more accomplished than everyone else in Toronto,” Mr. Catto said. “So, when they turned up at the Colonial, it was ‘Yes, it’s officially a scene now,’ with everyone scrambling like crazy to even compete. The bar had been completely raised.”

By June, 1978, the band was established enough to land a spot on a bill at Toronto’s Horseshoe Tavern with New York’s Suicide and Detroit’s Destroy All Monsters, which featured members of the Stooges and MC5. The performance by Suicide changed Mr. Lewis’s outlook on the power of music.

“It was Suicide’s whole attitude and aggression and artistry,” said Gary Topp, one half of the concert promotion duo the Garys, who booked the show. “Gord told me he’d never seen anything like it, and that he first realized the potential the music had.”

On Dec. 2, 1978, Teenage Head was one of the headliners for the infamous Last Pogo concert promoted by the Garys at the Horseshoe. When police shut down the show, the small riot which erupted made mainstream news.

After the road accident in 1980, Teenage Head released the albums Some Kinda Fun in 1982 and Tornado a year later. Musical tastes were changing, though; post-punk bands and new wave artists replaced their scruffier predecessors. Mr. Lewis and the Head continued touring over the years with fluctuating personnel. Money wasn’t exactly flowing in: It was later discovered that a manager had forged Mr. Lewis’s signature on cheques issued for songwriters’ royalties.

Through it all, Mr. Lewis kept up his studies, at McMaster and elsewhere. He eventually earned a certificate in music studies at Mohawk College, and, in 2009, was admitted to the Mohawk College Alumni of Distinction.

Though Mr. Lewis struggled in later years, there were moments of revived glory. In 2015, Mr. Lewis’s solo band opened for the Diodes for a string of dates. “Every night we got Gord up for the encore to play Bowie’s Jean Genie,” said Diodes guitarist Mr. Catto. “It was like standing under a 747 taking off with both of us on stage.”

In 2019, Mr. Lewis was hospitalized for months for clinical depression. A performance at the halftime show at the Labour Day Classic football game that year between the Toronto Argonauts and the hometown Hamilton Tiger-Cats seemed to buoy the guitarist’s spirits. At the time of Mr. Lewis’s death, Teenage Head had forthcoming concerts scheduled in Winnipeg, Saskatoon and Oakville, Ont.

Reacting to the 2008 death of bandmate Frankie Venom, who performed until the end of his life, Mr. Lewis once mentioned that he would like to do the same. “I’d like to go playing, still gigging,” he said in Douglas Arrowsmith’s 2020 documentary.

After Mr. Lewis’s death, Teenage Head posted a note on social media vowing to fulfill its coming live commitments, “to honour our fallen brother and to start the process of healing.”