Taylor, Stephanie - "I Don't Know Where I Stand" 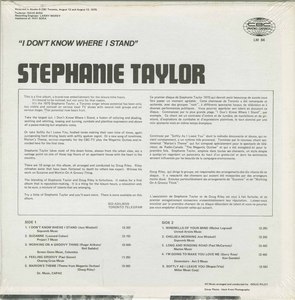 Stephanie Taylor - "I Don't Know Where I Stand" 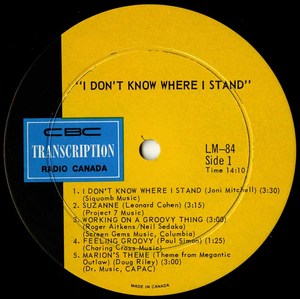 Stephanie Taylor - I Don't Know Where I Stand LABEL 01 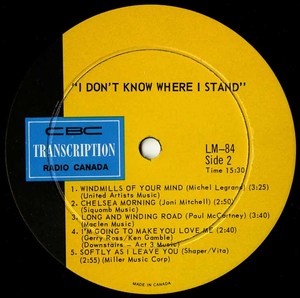 Stephanie Taylor - I Don't Know Where I Stand LABEL 02 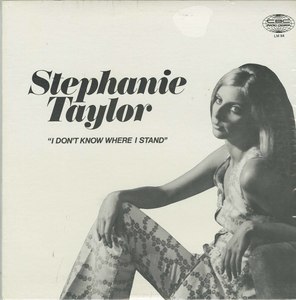 "I Don't Know Where I Stand"

Performing regularly in the 1960's with Diane Miller and Rhonda Silver as the girl vocal group "The Girlfriends" on CBC TV's rock 'n' roll show "Music Hop" (hosted by Alex Trebek), and later as a singer with Hagood Hardy's Montage in 1969 (CBC LM 81, Canadian Talent Library CTL 477-1155/5155); in 1970 Toronto's Stephanie Taylor broke out with her own album "I Don't Know Where I Stand". The magnificent example of soft pop rock was recorded at a hot spot - Studio G in CBC Toronto on August 12, and August 13, 1970; all of the music was arranged and conducted by Doug Riley.

Stephanie Taylor also provided vocals for Larry Mattson LP "Worth Waiting For"; The Sycamore Street Singers "Bright Down the Middle" on Ampersand 477-C100, released 1970; Cliff Edwards "Transition" on Polydor 2424 071, released 1973; The Eric Robertson Christmas Album on Silver Eagle 1032, released in 1984; and she performed with The Laurie Bower Singers on a few albums. She also had a track "Satisfying Love" on "The Hits of Opry North" on RCA Country Club KEL1-8101, released 1978.

"Marion's Theme" was written expressly for the CBC-TV play "The Megantic Outlaw" and was recorded on this album for the first time. Stephanie also performed regularly on TV for Keith Hampshire's Music Machine, performed weekly on the Bobby Vinton show, and hosted "Canadian Express" in 1978. She married Eric Robertson and had a prolific career doing studio work and commercials.

In the late 1960s, CBC augmented its commitment to Canadian artists by producing original albums by home-grown talent and distributing them on vinyl solely to its broadcast affiliates, both in Canada and across North America, in runs of just 250 copies. These discs have become holy-grail items for collectors and are now being remastered from the original tapes where available, or carefully restored from mint vinyl originals with the original artwork. They are pressed on 180-gram heavyweight black vinyl on brand new, state-of-the-art record pressing machines.

"I Don’t Know Where I Stand" is a classic album of sunshine pop with incredible jazz infused vocals of covers including Lennon/McCartney, Paul Simon, Leonard Cohen and Joni Mitchell with musical backing arranged and conducted by Doug Riley. Little is known of Stephanie Taylors’s career outside of performing in the 60s as a member of the girl vocal group ‘The Girlfriends’ on the CBC's rock 'n' roll show Music Hop and a handful of songs recorded in connection with CBC projects as a member of vocal group ‘Liberation’ for Keith Hampshire's Music Machine in the 70s and as lead singer with Hagood Hardy's Montage in 1969.