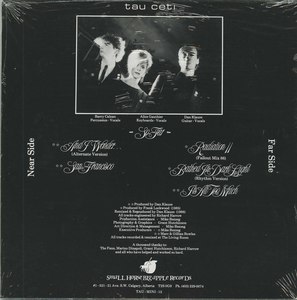 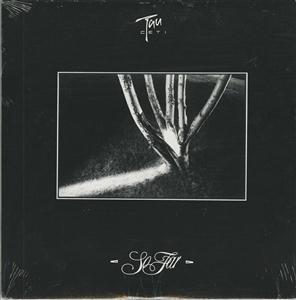 Tau Ceti was formed in 1984 from the ashes of the Calgary garage band Chronological Order. The band worked to write original songs with the intent of recording, playing many Calgary landmarks along the way: The Long Bar, Ten Foot Henry's, The National Hotel, and moving on to play bigger venues like Mac Hall Ballroom at the University of Calgary. Tau Ceti was the first Calgary band to headline at The Center for the Performing Arts. Along with vinyl output, they had two videos that received airplay on MuchMusic "Radiation" and "San Francisco" which was added to regular rotation for several weeks. The band had some commercial airplay on CBC Brave New Waves and Calgary FM stations with the song "And I Wonder". The group split up in 1987 Calnan currently lives in Houston working as an engineering designer, still playing with an original project, and is an endorsee for Pintech Electronic Drums; Gauthier has her own Internet company based in Montreal and has continued as a visual artist creating with oil and charcoal. Klauss lives in Los Angeles. Singles 1985 Radiation [12"] 1986 And I Wonder/San Francisco (Small Horse, Big Apple) SHBA-7-1 1986 So Far [7" full length] 2.) Italian dark ambient artist, part of the Umbra label family.

A thousand thanks to:
The Fans, Marino Dinapoli, Grant Hutchinson, Richard Harrow and all who have helped and worked so hard.