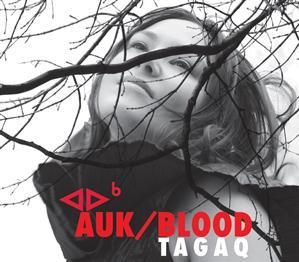 When Tanya Tagaq Gillis’ music fills your ears -- either in person or on her new CD Auk -- she is genuinely one of those rare artists whose sounds and styles are truly groundbreaking. ‘Inuit throat singer’ is one part of her sonic quotient. So are descriptions like ‘orchestral’ ‘hip-hop-infused’ and ‘primal’…but these words are not usually used collectively.

In the case of Tagaq, however – especially on her sophomore disc Auk-- they are. Auk is a considerable expansion upon the work she created with her debut, Sinaa; while that was largely focused on her individual chants and vocals, this new record is perhaps more reflective of what Tagaq brings to her passionate and powerful live performances, specifically the energy and beauty that comes from collaboration.

This new CD – recorded in Pontovedra, Spain and Calgary, Alberta – brings an assortment of guest vocalists to the mix, from Juno Award-winner Buck 65 to Faith No More/Lovage frontman Mike Patton (who is releasing Auk in the U.S. on his own Ipecac label) to dynamic human beat box artist Shamik. Juan Hernandez once again produces the disc, as he did for Tanya’s debut. The collaborative process is like oxygen for Tagaq, who has flourished recently cowriting and throat singing with the Kronos Quartet on a project aptly titled Nunavut. A rare and recent performance of the workwas described by a Los Angeles Times reviewer as “extraordinary” and “remarkable.”

The diversity and sum composite of creative collaborations have clearly provided Tagaq with the opportunity to grow and expand the musical landscape upon which she treads; Auk is proof positive of that. Ranging from whispers and haunting melodies to fullforce passion and power, the diversity and depth on Auk is self-evident: the thread that ties it all together is Tagaq’s candor and passionate commitment to her music. “I’m interested in baring everything…that to me is reality, and hopefully other people can sense that.”