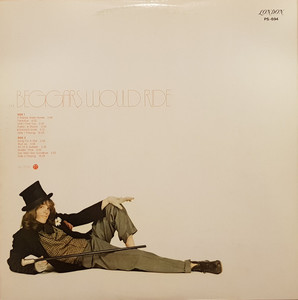 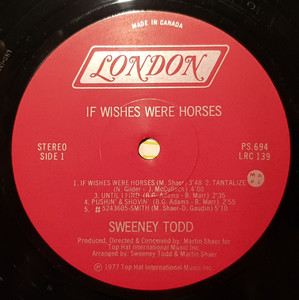 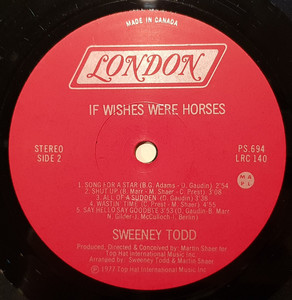 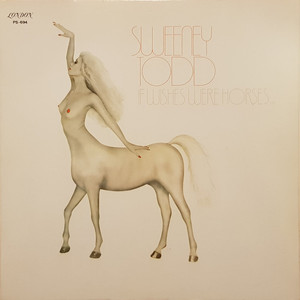 If Wishes Were Horses cannot escape the unmistakable influence of hot child Nick Gilder and his trusty sidekick James McCulloch, who acrimoniously split for the City of Angels after writing the doomed single "Roxy Roller" on the first Sweeney Todd. Enter a certain 16-year-old named Bryan Guy Adams, mimicking the gilded genius down to the last note and pushing this rocky choral show all the way over the top. Except for stellar opener "Tantalize" and bizarre Berlin finale "Say Hello Say Goodbye," Gilder is gone (Sweeney Todd gives him a snide sendoff in "Song for a Star"). Throughout the remainder of this grand and cosmic obscurity, Adams croons (the title track, written by the band's manager) and moons ("Until I Find You"), but never shuts up until "All of a Sudden," a mesmerizing instrumental, materializes out of nowhere. With the greatest of ease, Bryan the boy wonder spreads Gilder's glittering gospel of pixie dust and backstage biz with more helium and heady Mercury bombast than anywhere in his homogenized solo work, even sliding in some sexual shenanigans ("Pushin' & Shovin'"), resulting in a theatrical touch of magic sure to make you sigh.
-Doug Stone, All Music Guide

British-born Nick Gilder settled in Vancouver at a young age and after finishing high school, decided to pursue his love of singing. In the early 1970's he and his writing partner Jim McCulloch put together their version of a glam band, Sweeney Todd, with John Booth, Budd Marr and Dan Gaudin. They hooked up with newly-arrived British producer Martin Shaer, who owned his own recording studio, and created the bed tracks for their first album. Shaer approached London Records about the band and London signed them in 1975.

Their self-titled debut was released in 1975 and the single "Roxy Roller" eventually went to No.1 in Canada. This success caught the eye of Chrysalis Records in the US, who managed to lure Gilder and McCulloch away from the band. Gilder would go on to a rather successful solo career.

Clark Perry was brought in for lead vocal duties, and Skip Prest was recruited for guitar. At this point, the production company that Shaer worked for got into financial difficulties and handed over Sweeney Todd's contract with them to him; he found himself owner of the band.

Very quickly, however, it was discovered that Perry was not working out despite the re-charting of the "Roxy Roller" single which peaked at #90 in the US.

In due time, 16-year-old Bryan Adams took over the vacant spot. How Adams joined is described differently by all involved - either he approached them or they approached him - but suffice to say that Shaer was impressed with his personality, his fledgling song-writing abilities and his ability to mimic Gilder's vocal inflections down to the syllable. The youngster got the job.

Into the studio went the new incarnation of the band, and the result was If Wishes Were Horses, which also featured three songs co-written by Adams. Despite a grueling touring schedule to promote a couple of singles (including the third re-issue of "Roxy Roller" which hit #99 on the US charts), including some dates with Trooper, the album failed to sell as well as the first ST album and late in 1977 Adams left the band. He was replaced by Chris Booth.

Adams's departure signaled the end of the band. Prest left shortly thereafter to work with the Rocket Norton Band, to be replaced by Grant Gislason, but this version didn't last long and they called it quits in 1978.

with notes from Leslie Charles and Nick Gilder