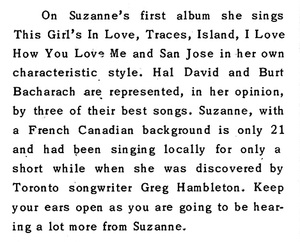 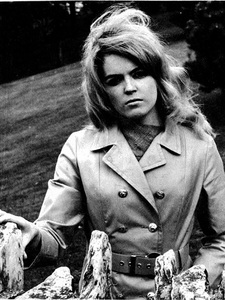 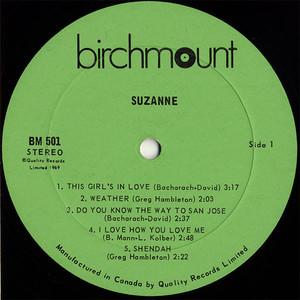 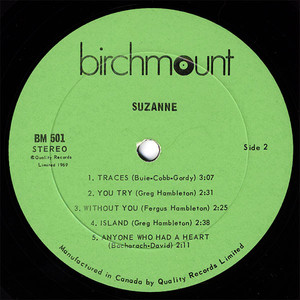 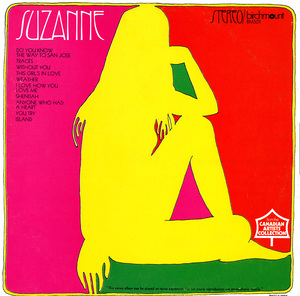 Who Is Suzanne?
The first song;off the first album (BM-501), from this great Canadian label. Birchmount Records was the brainchild of parent label Quality Records. Birchmount was meant to be a budget label, a way to offload some of their existing properties with unsold stock that Quality had (Earl Mitton, The Guess Who, Guido Basso, The Beau-Marks, etc.), or they’d just make a new compilation record with existing masters they owned by various artists. Though this may have been the initial intention, about half of the first 80 releases were unique Canadian content, exclusive to the label.

Suzanne (last name unknown) was a 21 year-old French-Canadian singer discovered by Greg Hambleton; a Canadian singer in his own right, great songwriter and eventual label founder, who was working as a producer and talent scout for the label (having his hand and many of his original songs peppered through a number of these releases).

On Suzanne's lone album she sings This Girl's In Love, Traces, Island, I Love How You Love Me, and San Jose in her own style. The album contains some cover recordings of pop hits of the time and 4 tracks penned by Greg Hambleton and one by Fergus Hambleton. A few of these songs are the vocal version of the instrumental version featured on the "Tuesday's Children" (BM-508) album.

A lot of gaps in information plague the label, but, as a budget line, this is to be expected. A number of the initial albums in the “Canadian Artists Collection” have no production/musician credits and a few are performed by full on “shadow bands” (Candy Rock Fountain, Suzanne, Tuesday’s Children, The Sultan Street Nine, The Rising Sun,etc.) Many of these “shadow bands” (at least the ones based in Toronto) were rumoured to actually be (at least in part) The [Magic] Cycle; a Toronto Psych/Rock group active from 1965 to 1973, who released two albums and multiple singles of their own.

It seems the big plans Birchmount had for her weren’t to be, as she was never heard from again. A short-lived career for a talented singer.
-Aaron Lusch
AaronLusch@hotmail.com