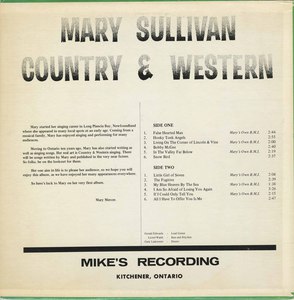 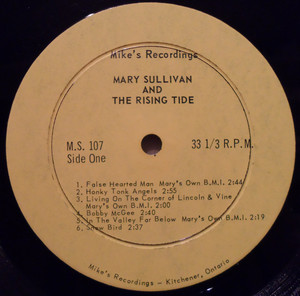 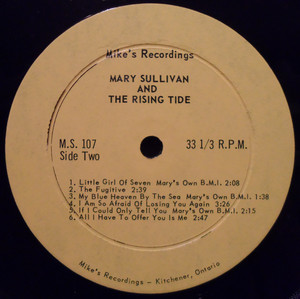 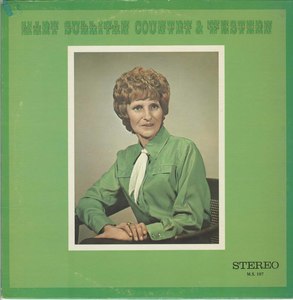 I found this LP at a flea market in Ontario and have never seen anything about it anywhere on the internet other than one Ebay auction in which is was included as part of a giant lot. I would love to know more about this album and I hope that by putting it up on this site, we can find out more!

Mary Sullivan warms my heart. She is a country and western style singer and songwriter, however her music is quite unique. It would not be inappropriate to say her music lends a slight comparison to the overall feel of listening to The Shaggs, although Mary is a little easier to follow. Half of the songs on this album are her own compositions. With a slow-strumming, twangy, minimalistic band accompaniment, her voice cuts through with purity and integrity. Though at times it sounds as if the band is unsure where the song is about to go, Mary's confident voice tone leads them to the next part assuredly. The most honest and beautiful original composition on this record, “False Hearted Man”, advises the supposed female listener to stay away from these kinds of men who will “ruin your good name” and “leave you in shame.” Mary repeatedly warns, “and if you don't listen, you have no one to blame,” giving you feeling she could confess a bad experience of her own. Other originals on this album tell stories of being raised by her “auntie” since age seven and of her love for Nova Scotia. She also wrote an upbeat number about having fun hanging out on the corner of Lincoln and Vine streets, wherever that may be. Of the handful of covers she does, her version “It Wasn't God Who Made Honky Tonk Angels” almost tops Kitty Wells' recording in my book. While she is marching to the beat of her own drum, her purposeful and straightforward singing make this effectively endearing. Something about Mary grabs your attention. You can tell she is the honest real deal. She means what she says and she feels it in her heart!

From the back of the LP: Mary started her singing career in Long Plancia (sic?) Bay, Newfoundland where she appeared in many local spots at an early age. Coming from a musical family, Mary has enjoyed singing and performing for many audiences. Moving to Ontario ten years ago, Mary has also started writing as well as singing songs. Her real art is Country & Western singing. There will be songs written by Mary and published in the very near future. So folks, be on the lookout for them. Her one aim in life is to please her audience, so we hope you will enjoy this album, as we have enjoyed her many appearances everywhere. So here's luck to Mary on her very first album.
Cathy Illman, Museum of Canadian Music

Listed as “Mary Sullivan and the Rising Tide” on the record label.