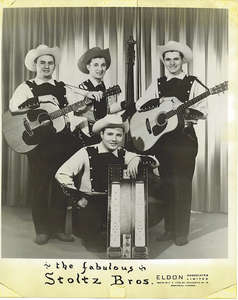 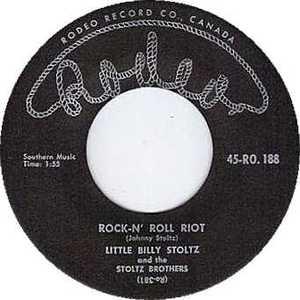 The Stoltz Brothers were a Canadian hillbilly group that came from a musical family that included nine musicians. Before they formed the Stoltz Brothers Orchestra in Calgary, Alberta in 1950, the boys had played either by themself or collectively with other groups for several years.

They gained some following out in Western Canada appearing over radio stations CFCN, CFAC and CKXL, all of which were in Calgary as well as a weekly show over CJRD in Red Deer, Alberta. They became one of the top acts appearing at the world famous Calgary Stampede.

For several years, the Stoltz Brothers were associated with the Calgary Western Jamboree and at times shared the spotlight with the likes of Elton Britt, Homer and Jethro, Hank Thompson and Sonny James.

In 1957, the group found itself in Montreal, Quebec and recording for the Rodeo Label and also appeared at various resort hotels and night clubs in the Montreal area. For instance, they co-starred with the pop group, Ink Spots and the Corbinas, Marcilli and Janis and the Continentals at the LaPointe Hotel. The Faisan Bleu starred them with Ted Lester and the Conrads, including appearaces on CKVL, a Montreal radio station.

Their reputation grew and they got to appear at the Flame Cafe in Minneapolis, Minnesota, where they got to share the stage with stars of the Grand Ole Opry, such as Pee Wee King, Patsy Cline and Porter Wagoner.

In the winter of 1963, the group was appearing nightly at the Monterey Candlelight Room in downtown Montreal.

Finally, in August of 1963, the group was signed by Brite Star Recording Company, under the direction of Tex Clark.