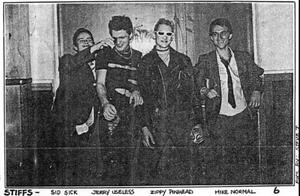 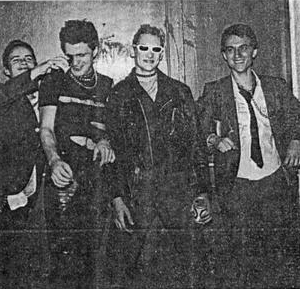 Here's the original version of the oft-covered Canadian punk classic (see versions by Subhumans, Overkill, Screeching Weasel, D.O.A., among others), originally penned by one Gerry Hannah, aka Gerry Useless, who later did five years in prison for remarkably intense political activism as a part of made-in-Canada terrorist group "The Squamish Five". "Among other actions, the group blew up an environmentally unfriendly hydroelectric substation on Vancouver Island and bombed the Litton plant near Toronto, which manufactured parts for the American cruise missile, a 'first strike' nuclear weapon." He really meant it, in other words.

It was recorded in May 1978 but was never released until 1991 when the song appeared on Last Call Vancouver Independent Music 1977-1978.

The Stiffs were one of Vancouver's more exciting new bands formed during the Spring of 1978. The band featured Gerry Useless and Mike Normal on bass and guitar, respectively, who would later team up with Wimpy Roy and Dimwit to form the Subhumans. Filing out the Stiffs' lineup was future Rabid frontman Sid Sick on vocals and local personality Zippy Pinhead on drums.

As D.O.A. had just released their Disco Sucks EP, The Stiffs decided to go into the recording studio and see what they could come up with. After only four hours in the studio, The Stiffs had recorded and mxed three songs for a planned 7" ep. Unfortunately, the band broke up shortly after the recording session and that material, like a lot of fine recordings by Vancouver bands during the following years, was never released.

However, you can' keep a good song down. Gerry and Mike took "Fuck You" with them to the Subhumans where it became a fan favourite. Later on, this legendary Vancouver tune became a staple of D.O.A's live set.
-Last Call