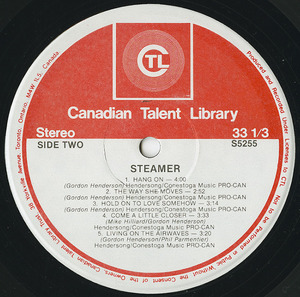 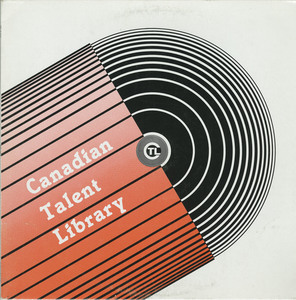 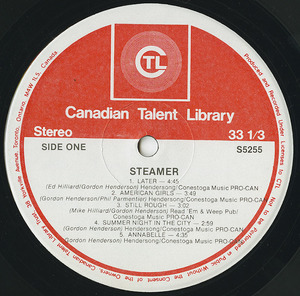 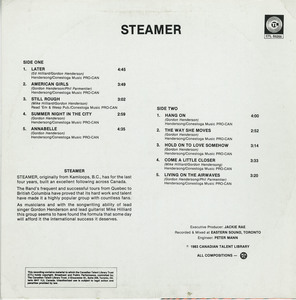 Anyone who grew up in the 1970s and '80s in Kamloops will probably remember a band called Steamer.

"Back in the '70s, if you went to a school dance, you knew who Steamer was," recalled Ken Sell, a bassist with the local group Swing Cat Bounce. "They had professional gear. They had management and they had colour posters. Nobody had colour posters. That's when I first heard them."

"The amazing Steamer band," said Larry Peat, a member of The King Pins, another local band "that's been around twice as long but probably played one-tenth the gigs."

"That was quite a spectacle," he added. "They were a great band, much in demand."

The rock group sailed into the spotlight in 1977. After making a name for themselves locally they were discovered by a talent agent in Toronto, toured with The Guess Who and Steppenwolf and signed a record deal in 1979 with Intercan/Pickwick.

What ever happened to Steamer? They came back to Kamloops and settled into their lives, but the music never ceased. They played on in a variety of different groups over the years and continue to this day.

And Mike Hilliard - the fleet-fingered guitarist behind the group - is still setting strings on fire 30 years later.

"He and I played together since we were kids," said Ed Hilliard, Mike's younger brother, who teaches music at Sahali secondary. At age 12, Mike started out by stealing his sister's guitar when she wasn't using it. His father recognized his talent and let him take lessons.

"Our parents' family really had no musical talent at all, but Dad was a big-band swing fan. He had old 78s from that era Mike and I would listen to. There was always music in the house and they were as encouraging as they could be without being musicians themselves."

They took additional instruction at Humber College, well known for its music faculty, near where they grew up outside of Toronto. Mike studied with the head of the music program.

The family moved to Kamloops in 1974 and Mike started teaching guitar at Filek's Sound. He formed his first band, a country quartet called Love Potion, with Pat Grove-White, Pat Stracken and Billy Landygoon. Then along came Steamer.

"Mike met Gord Henderson and said we wanted to put a project together. I was 14 when the band started."

Mike was the lead guitarist from the outset. Henderson's vocal style was '70s pop influenced. Hank Hutchenson played bass and Ed played drums. They took their name, not from the steamboat era, but from a character in the film Walking Tall II.

Steamer started playing more in the Lower Mainland, but their path to success led eastward, where they had to rebuild their reputation on the southern Ontario bar circuit. They released three albums, Look At Me Now (1980), a self-titled album in 1982 after signing with RCA, and Steamer Part Two in 1983. They toured as far afield as South Korea. After eight years, Steamer sailed home in 1984.

"I think that's a long time in this town for any band to stay together," Ed noted. "We were the first group out of Kamloops to land a recording contract."

In 1985 Mike formed the Joe Berry Band in Kamloops with Ed, Peter Smith and Doug Goodman. They were a popular band on the city scene. A couple of years later, Mike met horn player Willy Ward and they played countless duo gigs and formed several one-off bands for various events. He also worked with Ward and Norah Ashmore on her Norah's Ark Show.

Then came The King Pins in 1992 with Peat, Rob Bison, Rod Schackenberg and Calvin Machmer. They still play on occasion.

"Mike initiated it when we worked in the Cariboo College computing department," Peat said. "We thought we were going to do this and make some extra money. It's a hobby is all it really turned into."

"He's easily the best guitarist I've ever played with. I would hesitate to say, the best in Kamloops. He can rip off a guitar solo like nobody's business.

"He practices a lot. A lot of his ability comes from the fact he's addicted and he plays constantly - jazz, blues, electric, folk acoustic."

The Hilliard brothers formed The Mob, an R&B ensemble, in 1994, adding Don Bennett on trombone and Syd and Steve Griffiths on saxophones among others. Three years later Mike joined The Big Chill Band, which similarly became a regular presence, playing to soldout audiences.

"One thing I think is amazing about Mike is his ability to write songs," Weeks said, recalling a gig at Sun Peaks. "By the time I got out of bed he had already written a song, a really, really good song with a kind of flow for melody and lyrics and time phrases."

Last year the couple formed Swing Cat Bounce with Ed on drums, Ken Sell on bass and Bill White on guitar. Sell and White are coworkers of Mike's at B.C. Lottery Corporation.

"He's the real deal," White said. "Definitely a guy who knows his way around a guitar neck. He's got endless stories, road warrior stories. Whether they're true or not doesn't matter."

"Mike's got great versatility and crosses multiple boundaries," Sell said. "He will almost play with anything and he never pulls off the rock show thing. Greater ability or lesser ability, he fits in. He doesn't make people feel out of place."

Swing Cat Bounce's sound blends electric blues, swing, R&B and funk. This summer, along with playing around the province, they record their first album with producer Jack Lavin of Power Blues Band fame.

And where is guitarist Mike Hilliard in all of this?

Well, if he's reading this he's found his birthday surprise.

Happy birthday, Mike, from everyone in the band.

There is a handful of tickets left for tonight's surprise birthday party in the Plaza Heritage Hotel's Blackwell Hall. They play next at the Westsyder Pump June 5 and at Canada Day celebrations in Riverside Park July 1.

"It's great to be playing with Mike again," Ed said. "We have such a history of playing together. It's like we never left off."
-Kamloops Daily News