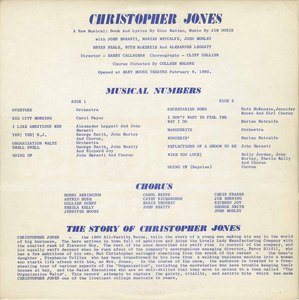 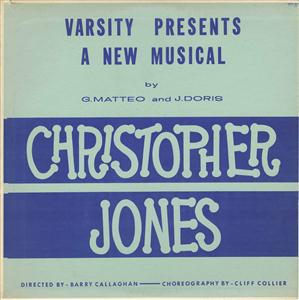 "A New Musical: Book and Lyrics by GINO MATTEO, Music by JIM DORIS. Directed by BARRY CALLAGHAN (now a distinguished Canadian author). The other credits are shown on the back cover of the album.

"CHRISTOPHER JONES" opened at HART HOUSE THEATRE, TORONTO, FEBRUARY 8, 1960. The O.C. LP was available at the theatre only, and is virtually impossible to find today. THIS IS A MINT original.

"The 1960 All-Varsity Musical tells the story of a young man making his way in the world of big business. The hero arrives in town full of ambition and joins the Lovely Lady Manufacturing Company with the exalted rank of Elevator Boy.The rest of the show describes his swift rise to control of the company, and his equally swift descent when he runs afoul of the company's unscrupulous managing director, Percy Blifil, who has a few ambitions of his own. But Christopher salvages something from the wreck of his career - the bosses daughter,Stephanie Collins, who has been transformed by his love from a walking business machine into a woman who starts life afresh with him,as Mrs. Jones. In the course of the show, the audience is treated to a free-wheeling tour of various aspects of the "Organization", including the secretaries who have trouble keeping their bosses at bay, and the Sales Executives who are so well drilled that they move in unison to a tune called "The Organization Waltz". This record attempts to capture the gaiety, vitality, and satiric bite which has made "CHIRSTOPHER JONES" one of the liveliest college musicals in years."