Snider, Art - Corny Songs I Play on My Organ 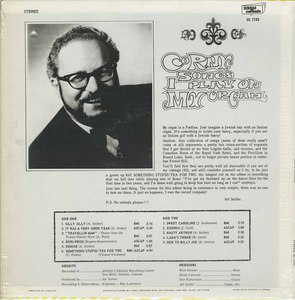 Art Snider - Corny Songs I Play on My Organ 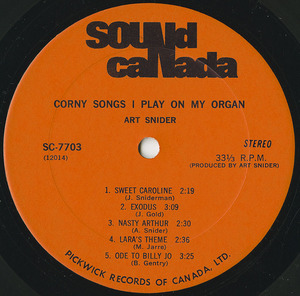 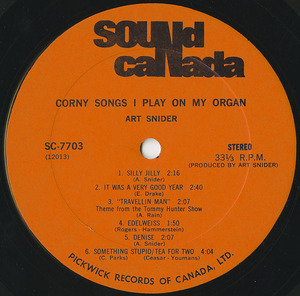 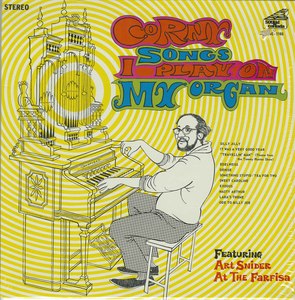 Corny Songs I Play on My Organ

Here's one of the quirkiest albums ever recorded by a Canadian. It's also quite difficult to find. Art Snider, founder of Sound Canada Records, Chateau/Canatal Records and Periwinkle Records (and was recording Engineer on many of the recordings) was a sort of musical genius. Here, he plays songs on his Farfisa Organ. Three of the 11 tracks are his own compositions. He recorded and produced this album in 1968 when he was 42 years old. One of the tracks "Travellin Man" was the Theme from the Tommy Hunter Show. Al was accompnaied by Rick Homme on bass; Brian Leonard on drums; and Ihor Kukurudze on the guitar. The recording and re-recording engineer was Ray Lawrence. Art Snider was inducted into the Canadian Country Music Hall of Fame in 2002. He passed away in 1987.

liner notes:
My organ is a Farfisa. Just imagine a Jewish boy with an Italian organ. It’s something to tickle your fancy, especially if you are an Italian girl with a Jewish fancy!

Anyhow, this collection of songs (some of them really aren’t corny at all) represent a pretty fair cross-section of requests that I get thrown at me from Legion halls, and taverns, and the Canadian Room of the Royal York Hotel, and the Pavilion in Round Lake Sask., not to forget private house parties in suburban Forest Hill.

You’ll find that they are pretty well all danceable if you are of my vintage (42) and still consider yourself as I do, to be just a grown up kid! "Something Stupid - Tea For Two", the longest cut on the album is something that we fell into while playing one of those “I’ve got my husband up on the dance floor for the first time in two years, and I’m damn well going to keep him here as long as I can” medleys.

Just one last thing. The reason for this album being in existence is very simple, there was no one to turn me down. It just so happens, I own the record company!
-Art Snider