Slow - Against The Glass (EP) 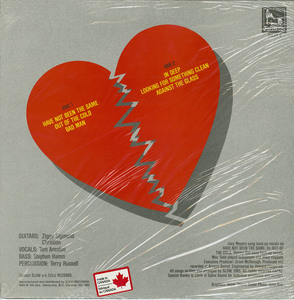 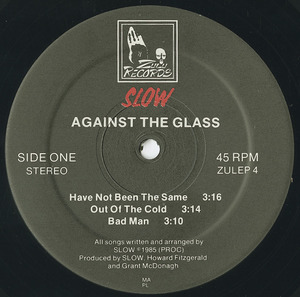 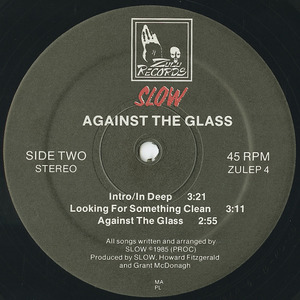 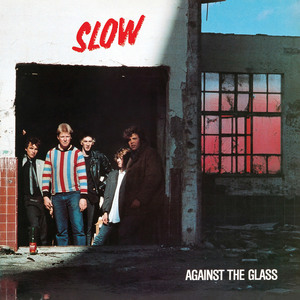 Vancouver's semi-legendary five-piece band Slow got their start in the early 1980's named Sifu. They changed their name to Slow and got signed to the west coast's independent label Zulu Records. In 1985 they released their first piece of product, a 12" single called "I Broke The Circle", and they gained almost immediate local stardom. Such was the interest generated that in 1986 they released a six-song EP, called Against The Glass, which garnered a strong positive response from fans and critics alike across the country.

The band became known best for their outrageous stage show, and they would play anywhere for anyone. At their gig on the opening night of the Festival of Independent Recording Artists, Expo 86's tribute to Vancouver's thriving independent music scene, Slow managed to stop the Festival almost before it began. The details aren't too clear but basically what seems to have happened is that while performing, people who weren't part of Slow's normal audience wandered into the pavillion in which they were playing, were terribly shocked by what they witnessed the band doing, and rushed out to complain to Expo officials. Shortly thereafter, the power was literally turned off on the band, ending their set at 45 minutes. Bassist Stephen Hamm was not impressed, and apparently pulled his pants down to moon the audience; lead singer Tom Anselmi quickly followed suit, also choosing to expose other parts of his anatomy. When the band left the stage they were met by Vancouver Police who considered charging them with indecent exposure. Meanwhile, Expo officials cancelled the rest of the night's performance (and eventually the rest of the festival, "for reasons of safety and security"), which angered those purposely in attendance, and there ensued angry protests from said fans - a group got onstage and were almost impossible to remove, another group got into a fist fight, another group went to the Expo office to use every complaint pad they could find to lodge their complaints, and yet another group descended on the BCTV on-site office where they chanted so loudly that BCTV had to cut their 11:00 o'clock news broadcast short and go to their movie of the night.

Shortly after this debacle, the band split literally in two - Anselmi and guitarist Christian Thorbaldson left to form (c) (aka Copyright), and bassist Stephen Hamm and drummer Terry Russell went on to form Tankhog.

It is almost impossible to over-estimate the effect of Slow on Canadian music. Formed in the mid-80s in Vancouver, and releasing only one album and one 7" on Zulu Records, the band has consistently been called one of the most influential punk rock bands in Canada and forerunners of the Seattle grunge scene. Perhaps most infamously, Slow is also the band that brought Expo 86 to its knees.

Not bad for a band that recorded only eight songs.

Slow was formed by Thomas Anselmi, Christian Thorvaldson, Stephen Hamm, and Terry Russell. Ziggy Sigmund was added to the line-up soon after as a second guitarist. The band released the 7" I Broke the Circle in 1985, followed by Against the Glass in 1986, which featured the legendary "Have Not Been the Same," one of the most iconic songs in Canadian music history. The song's name was even taken as the name for the CanRock Encyclopedia, published by ECW Press.

Slow's brand of rock n roll and punk rock has not aged one bit: Anselmi's voice is monstrous, the guitars seriously rock n roll, and the drummer is all energy and destruction. Against the Glass is the kind of album that could only be delivered by a veteran act of 20 years---or a bunch of genius teenagers with not much better to do. Artoffact Records is overjoyed to present the first-ever... more

This profile is managed by the guys at Storming the Base. If you order from here your email will be added to their mailing list, but that's what you always wanted, right?