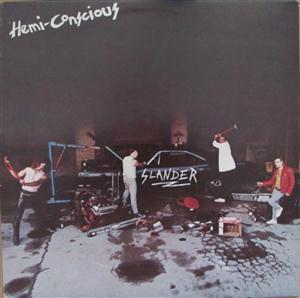 Noisy driving & melodic punk from Canada, no traces of hardcore despite the 1981 release date. Like many other Canadian bands Slander have a definite UK punk edge, still the music is fresh & original. Good one.

The original line-up consisted of Johnny Stringer on lead guitar and Paul Bleeder on rhythm guitar, both of whom were later replaced by Chris Crash who assumed all guitar duties. Chris Suicide the original bassist often went MIA and was replaced by Dave McGhee, thus forming the line-up of Slander. After frequent shows at The Turning Point and The Franklin in St. Catharines, Slander started to gain a reputation for being a F.T.W., F.T.L. band, and in general a crazy drunk snotty nosed fuck everyone punk band. Quite often fighting and drinking was involved and that earned them their reputation that was unlike Teenage Head and The Forgotten Rebels who were their rivals at that time. Slander disbanded in 1982 after some “questionable” management. Slander released an LP called “Hemiconscious” on North Lighting Music Publishing in 1981.

The band started out with me being a punk who drank with Slander but was soon to become the guitar player. The band consisted of Stevo ( vox) whom I used to play with in another band from Burlington, Ray (drums) who later went on to find fame with Junkhouse, Chriss Suicide ( bass ) former Forgotten Rebel , John F.(lead guitar) who was a nobody in the punk scene and Paul Bleeder( rhythm guitar) whom I replaced. After doing a few gigs at the Turning Point in Toronto ,John thought I was too unprofessional because I broke too many guitar strings and was too ... energetic ! so he quit the band. With just the four of us remaining we moved as forward as we could and Stevo's brother got us into Grant Avenue Studio through Bill McDowell who became our " manager " See Stevo's brother was doing some contract work for Bill and Bill was wanting to become involved with us as a promoter. He already managed "The Machines"! and "Cleveland" who were nothing like us but he tried make us " commercially acceptable" by releasing our "Hemi-conscious" LP which was done at Grant Avenue Studio.I think he had 5000 copies printed and we saw $ 0.00 from that . We didn't care ...then ! So after a brief and often absense with Chriss Suicide this young punk who hung out with us became the bass player and we did a few more shows. This bass player was Dave McGhie who later went on to be the drummer for the Forgotten Rebels for many years. Funny we never get mention when it comes to Hamilton punk history , only Teenage Head and The Forgotten Rebels get press but we were punks in every sense of the word. Drinkin' , fightin ' , fuck authority and F.T.W. were our attitudes. I went on years later to be the front-man for Columbian Necktie and then went on to be in The HammerbOiz. After that went south Barney ( Hammerboiz, Bassbag, Problem Children) and I started The Chico Maki Punk Rock Experience. It! went south also. We just couldn't get together anymore ... lives and jobs.