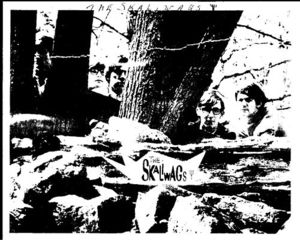 Super raw, gritty, and fuzz filled - a must have for collectors of sixties garage rock, this is considered Canada's best & rarest 2 sided punk 45.

Sought after and extremely rare, the first gold label release is less common.

Apparently, the band pressed 50 copies of this first pressing for themselves with the help of Alex Sherman (owner of the Excellent record studio and label in Ottawa) as a favor for the band who in turn handed them out to local radio stations, record executives, company representatives, loyal fans and family members to promote this 1st 45 release.

Based on local radio station air play popularity surveys at that time, the subsequent following 2 pressings flipped the song track titles on these 45's to better reflect the current music market trend.

The following 2nd and 3rd pressing runs had a very limited production run of approximately 200 copies in total.