Singh, Judy - A Time For Love 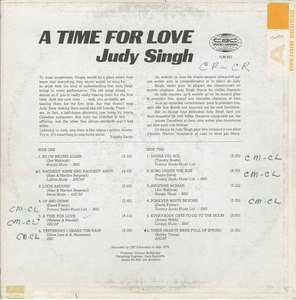 Judy Singh - A Time For Love 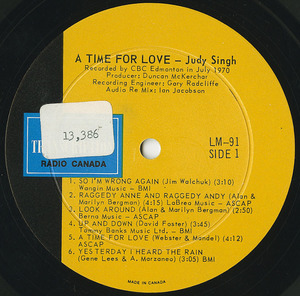 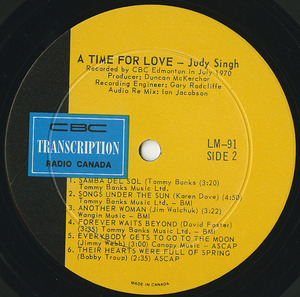 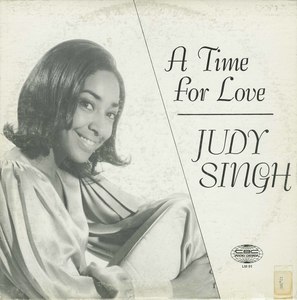 Judy Singh was from Edmonton, Alberta. She recorded this album at CBC Edmonton in July, 1970. This album is considered to be the holy grail of Canadian vocal jazz. It also featured Tommy Banks (Calgary) and was produced by Duncan McKerchar. The recording Engineer was Gary Radcliffe. Audio Re Mix was done by Ian Jacobson.

Tommy Banks wrote this on the back cover:
"Listening to Judy sing these songs is like taking a golden shower. Try it. It's something to sing home about." Before you try this watersport at home, you should know that golden showers used to mean the spent scented flowers of the golden shower deciduous tree that fall to the ground as the flowering season finishes.

A few years later, Judy recorded an album with Tommy Banks entitled Tom And Judy - Make Someone Happy GRT 9230 1000, 1971. Judy also has two non-album tracks on the equally rare compilation "Unselfconsciously Canadian". On that album, the song 'Emily' was recorded about her daughter, who was fathered by the late and great Lenny Breau.
-Robert Williston

Edmonton born singer Judy Singh’s 1970 CBC album is one of the most sought after sunshine pop by collectors.

This wonderful mix of influences from Sergio Mendes to Burt Bacharach features breezy jazz and bossa tinged arrangements by Tommy Banks of songs by the Bergmans, Johnny Mandel, Jimmy Webb as well as contemporary Canadian songwriters.

“Recording this album with my brilliant, dear friend Tommy Banks, was an absolute highlight in my career. What a uniquely creative period in music history it was. I love seeing how vinyl is being resurrected with such passion. I’m grateful to Majik Bus for including me in it all.” - Judy Singh