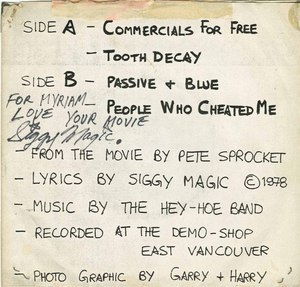 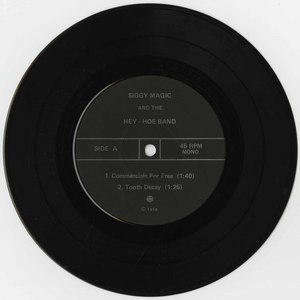 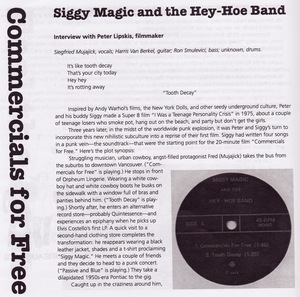 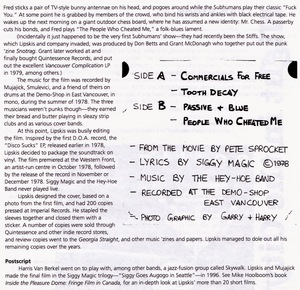 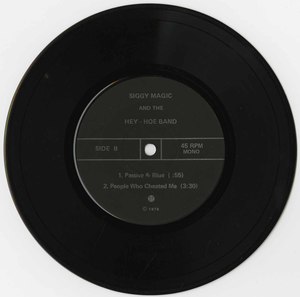 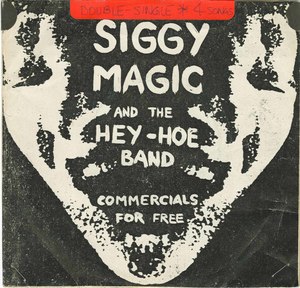 "Siggy Magic and the Hey-Hoe Band - Commercials for Free EP (Own, 1978). A country whose contributions to the punk vernacular rarely extend beyond tepid pop excursions or the substandard aping of their southerly neighbors. Now, now, before any Canadian aficionados feel unduly provoked and start spouting lines like “Hasn’t this asshole ever heard of the Neos, Dayglo Abortions, DOA, etc.?” let me lazily post the following disclaimer: The snare above is only in reference to the real never-weres—those bands or individuals whose records were pressed in the low hundreds and whose aspirations extended no further than their own vanity. It’s not my intention to undermine or denigrate this record’s musical superiority through qualifiers, but the reality that the UGLY sounds of the Hey-Hoe Band originate from the bucolic expanse of the Great White North is a decisive part of what makes the disc so remarkable. The fact that it’s a signature slab of strangulated roar / fortified grunt and strut, paralleled only by its closest philosophical compatriot—the first Snuky Tate EP—is of equal importance, too! The Commercials for Free EP, its tracks the proverbial lead-pipe cinch for inclusion on KBD #9 or #10, ended up on the last installment of Smash the State instead and was effectively lost to a wider audience. In a better world, this 45’s reputation would linger on the trembling lips of record collecting mama’s boys and forum trolls the world over. Not surprisingly, both Siggy and his EP were concepts that hatched and expired within the confines of the studio. The single, issued in an edition of 200 copies, features four songs; each tune corresponding to a specific act within a film of the same name. Chronicling the sojourn from yokel to punker, the record’s only dud, The People Who Cheated Me, was intended for the film’s denouement and expressed Siggy’s ultimate disenchantment with his newfound lifestyle. Poor Siggy."

The copy shown here has a hand-written inscription on the back thanking the film maker from Siggy himself.