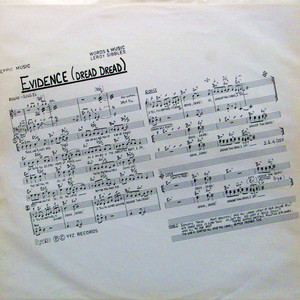 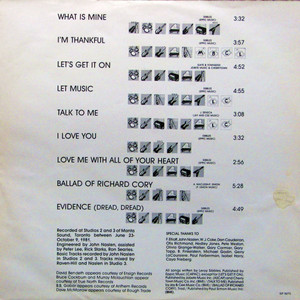 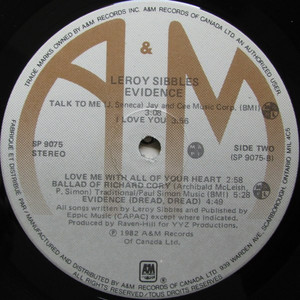 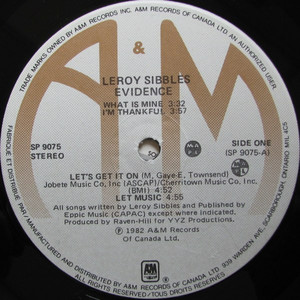 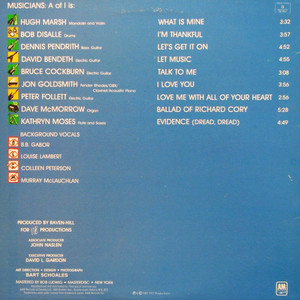 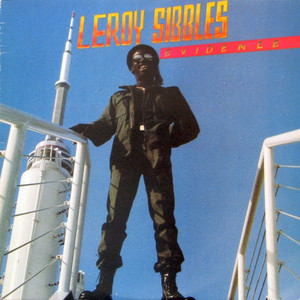 From Lions to Evidence: Bruce Cockburn, Leroy Sibbles and the Reggae Connection

Bruce Cockburn spent close to 10 years as a recording artist before his name began to be known outside his native Canada. Up to that time, his music was mostly folk and rock, with occasional ventures into jazzier territory. So it was a surprise to all involved when "Wondering Where the Lions Are", an out of character foray into reggae, broke through internationally at the tail end of the 70s.

Part of the success of that recording, and what made it so appealing and authentic sounding was the involvement of Jamaican/Canadian singer-bassist Leroy Sibbles and his rhythm section, Ben Bow and Larry "Sticky Fingers" Silvera. As Cockburn writes in his autobiography, Rumours of Glory, he brought them into the recording because he "didn't want to be just another white guy watering down someone else's culture."

"Lions", however, wasn't the end of Sibbles' and Cockburn's musical collaboration. The reggae ace sang on a pair of songs each on the later's Humans and Stealing Fire albums. Yet, it was Sibbles' 1982 release Evidence, a unique album all but forgotten now, which gave Cockburn and the entirety of his band the opportunity to delve into reggae much more extensively.

Evidence was recorded when Sibbles was 32 years old and already a well-regarded veteran of the reggae world, having been an integral member of the Heptones, a pioneering and influential band out of Kingston, Jamaica. The Heptones were part of the 1960s R&B and ska "bluebeat" music scene, a forerunner of what eventually came to be called reggae. In fact, Cockburn has mentioned that drummer Bow regarded the rhythm of "Lions" as bluebeat. There was a thriving cross-pollination of music between Jamaica and Toronto's West Indian population (explored on Light in the Attic's Jamaica to Toronto: Soul Funk & Reggae 1967-1974) and Sibbles became a part of this cultural and musical exchange when he moved to the city in 1973. He became firmly entrenched in Toronto's music scene, and issued a series of singles throughout the rest of the decade. Even so, he had lost some of the career momentum he had acquired in his homeland. His profile was increased when "Lions" became a hit and it must have felt good to hear himself on the radio, even if it was in a supporting role. It was a logical idea to work with Cockburn on one of his own albums, especially since he and the Canadian had gotten along well in the studio.

By 1981, Sibbles was affiliated with YYZ Productions and A&M Records, but had maintained enough of a connection with Cockburn's label, True North, to bring him on to the new album as well as Cockburn's current band, which included Bob Disalle on drums, Dennis Pendrith on bass, Jon Goldsmith on keyboards, Kathryn Moses on flute and sax, and Hugh Marsh on violin and mandolin. Stuart Raven-Hill, who had been responsible for getting Cockburn and Sibbles together in the first place, would produce. Raven-Hill had co-run Island Records' Canadian office and recently worked as tour manager for Cockburn (thanked in Cockburn's Humans liner notes for "Invaluable Assistance and General Bad Influence"). True North art director Bart Schoales would do the album cover design - one more personality that helped make it a True North album in many regards except in name.

Further illustrating the interconnectedness of the Toronto music scene, Raven-Hill had recently broken up with Judy Cade, now girlfriend of and backup singer for Cockburn. There were apparently no hard feelings, as the two continued to work together - on Evidence and later when Raven-Hill put together the Cockburn tribute album Kick at the Darkness, issued on his own Intrepid label.

Toronto's Manta Sound was booked for late June 1981 to start the Sibbles sessions. This made it an easy segue for Cockburn and band, who had just finished recording Inner City Front the same month there. Manta was a familiar home, as Cockburn's previous few albums had also been tracked at Manta, so the band basically just kept on going for the Evidence songs.

The resulting album is an upbeat collection of pop and soul-flavored reggae. The sound is very "of a type" with Cockburn's albums Inner City Front and The Trouble with Normal (recorded at Manta the following year). While his basic band appears on all tracks, Cockburn appears on four: "I'm Thankful", "Let Music", "Talk to Me", and "I Love You", where he delivers an especially lyrical guitar solo. Elsewhere, Hugh Marsh's electric violin adds a texture not commonly heard in reggae, pushing the music into new waters.

Evidence is unusual as well for the range of additional musicians who appeared on the album. On backing vocals Sibbles was joined by Murray McLauchlan (yet another True North artist), tragic Hungarian/Canadian pop-punk singer BB Gabor, Colleen Peterson (who had been part of the group 3's A Crowd with Cockburn in 1969 and had her own successful career as a country singer), and vocalist Louise Lambert, who also co-owned the tour bus company that Cockburn used. Lambert, who is now a voice and piano teacher in Maui, recalls "It was great fun singing Leroy's songs in the studio," and comments about her co-singers, "I loved Colleen's body of work, and we all played some of the same venues."

Bruce Cockburn - Inner City Front
Fleshing out the instrumental side of things were guitarist David Bendeth, who would later sign Cowboy Junkies and the Crash Test Dummies to record deals when he worked for BMG Music; Dave McMorrow, who had just joined Canadian new wave outfit Rough Trade, known for their controversial hit "High School Confidential"; and Peter Follett, who went on to become a multi-instrumentalist in the New Age field, on additional guitars. According to Bart Schoales, eccentric funk star Bootsy Collins was on the scene as well, playing pinball at the studio while recording took place, though he doesn't appear on any tracks, unfortunately.

Most of the songs are Sibbles originals, with the exception of the 1958 Little Willie John R&B and pop hit "Talk to Me", a smooth soul version of Marvin Gaye's "Let's Get It On" and Paul Simon's "Richard Corey", one of the few overtly political/socially conscious songs. The title song, musically the most straight-ahead reggae track on the record, carries a bleak message about the state of the world, proclaiming that the planet's wars, pollution, and economic woes are bound to get worse. Sibbles sings "it's gonna be dreader than dread"; in other words, that everything's going to hell and it's going to get pretty dreadful. Though the collection ends with this lyrically downbeat song, positivity and happiness are the overriding themes of the rest and the album is, overall, one of Sibbles' most widely accessible efforts.

With the tracks in the can, it was sent off to be mastered by legendary engineer Bob Ludwig, who in that year alone also worked on albums for the Rolling Stones, Rush, Journey, and ZZ Top. Meanwhile art director Schoales, as he had done for the cover of Inner City Front in the café across the street from the True North offices, used his virtual backyard of Toronto to tell a story with his cover portraiture. Sibbles is posed at the Toronto harbor front, resplendent in combat gear (though with a big smile on his face), looking larger than life, as big as the spire of the CN Tower behind him.

Evidence capped off an extremely busy few years for Sibbles; he issued four solo albums between 1980 and 1982, as well as performing regularly and appearing on other musician's albums. Though many people tell him today that Evidence is a favorite album of theirs, it didn't sell especially well and turned out to be his only album for major label A&M, despite winning the Canadian Black Music Award for album of the year. That year (1982) he was also named top male singer, top bass player and performer of the year. The rest of his 80s output, though, was sparse and he eventually moved back to Jamaica in 1994, later saying "I just went so far, and couldn't go no further there [in Toronto]. I lost... well, I was trying my best to keep up as much as I could, but I lost touch with what was happening in Jamaica [musically]."

Sibbles is still very active today, performing numerous concerts every year, including dates in far flung locales such as Japan and Africa. A recent CD available through his website focuses on some of his well-known reggae bass lines. He's also prominently featured on the "reggae wall" outdoor mural in Toronto, which honors the Jamaica/Toronto musical connection and the artists who brought the music to life.

By 1985 Cockburn had finally made it to Jamaica, which produced his song "Dancing in Paradise", more of an impressionistic travel narrative than a dance-ready song of any type. Any overt reggae influence in his music had disappeared by then as he moved on, ever the restless musical explorer. In a way, Evidence was the culmination of his involvement with the genre - an interest which had started in the mid-70s when he discovered Bob Marley and the soundtrack to the film The Harder They Come, and expanded later on under the tutelage of Raven-Hill. He says, "I wanted to incorporate some of that into what I was doing too…it would have been very bogus to announce that now I was a reggae player, but I wanted some of that influence in." [Music Makers and Soul Shakers podcast, Episode 19]

In the end, Sibbles and Cockburn enriched each other's music. What started as, ostensibly, a one-time collaboration on a reggae-flavored track of Cockburn's led to one of the most unique albums in Sibbles' and Cockburn's discographies, and in the legacy of the long musical connection between Jamaica and Toronto.
-Rob Caldwell, 13 October, 2016